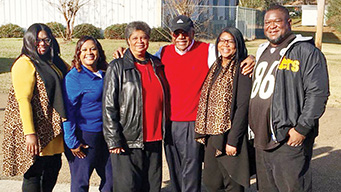 Mother: ‘This isn’t easy for anybody’

The Edwards family spent Christmas Day together like they always do, gathered at the home of Rev. Eugene and Cora Edwards to sing songs to Jesus.

This was the first Christmas without the two boys, cousins who were killed together Memorial Day weekend in a mass shooting that left six other people, including Lincoln County Sheriff’s deputy William Durr, dead and their families grieving.

The holidays were difficult for Edwards’ mother, Shayla, and Blackwell’s mother, Tiffany. The two are sisters who worship at New Zion Missionary Baptist Church in Bogue Chitto, where their father is pastor. Besides the two boys, the congregation that weekend lost Barbara Mitchell, her daughter, Tocarra May, and Ferral and Sheila Burage. Mitchell’s sister, Brenda May, and Durr did not attend the church.

“We’re a strong Christian family and that’s what is getting us through this. We’re relying on each other to get through this,” she said.

Edwards said they try to keep busy and keep their minds occupied.

“We’re fine,” she said. “We’re getting through this the best way that we can. This isn’t easy for anybody.”

Edwards said their family tradition is to congregate at her parents’ house in Bogue Chitto for Christmas. It’s her and her siblings and all of the grandchildren and great-grandchildren.

“We meet at their house and sing Christmas songs, and pray and eat and open presents,” she said. “Everybody gets gifts.”

It was when the family came together around the tree to exchange gifts that they felt the absence of the two the most.

“That’s when it started to touch home that the boys were not there,” she said.

The gifts this year were special, and represented their losses. April Clopton, a teacher at Brookhaven High School and the wife of coach Tommy Clopton, helped Edwards with her gift to each member of the family. It was a DVD slideshow of photos of Austin and Jordan set to songs.

Tiffany Blackwell’s gifts to the family were red blankets made by Jennifer Calhoun printed with the boys’ names — Jordan Eugene Blackwell and Austin Joel Edwards — situated around a sparkly ornament that says Christmas 2017. The scripture from Matthew 3:17 is printed on it as well: “This is my beloved Son, in whom I am well pleased.”

Their sister Sherry Grizzard bought copies of “The Shack” for everyone.

The movie, released in theaters in March, is about a grieving man who receives a mysterious, personal invitation to meet God at a place called The Shack. Edwards’ brother, Eugene Keith Blackwell, had seen the movie at the start of Memorial Day weekend.

“The day before that happened with Austin and Jordan, my brother had just watched it the day before,” she said.

He recalled the movie after he heard about his family and friends were murdered.

“That movie helped him get through it as he came down the road to see us,” she said.

Grizzard wanted them to watch it Christmas Day, but the dilemma they faced was that the Pittsburg Steelers — the family’s favorite team — was playing. So some watched the movie and some cheered on the Steelers to victory.

“Everybody was happy. It was a good day,” she said.

Though Jordan was not there, his family still brought gifts. Edwards explained that everyone took the money they would have spent on a gift for the Brookhaven High School Panther and donated it to a memorial scholarship fund Tiffany and Shon Blackwell started in their son’s name.

“The gifts they would have been giving to Jordan, they gave money instead to his scholarship,” she said.

The holidays were hard for Austin’s mother, but Friday was even harder — her son would have been 12 years old.

To celebrate, Edwards and her children, Caleb and McKinley, were joined by the entire family as they headed to Crazy Ninja in Flowood. It was Austin’s favorite place to eat.

“He liked it because it’s hibachi. They do the fire flames and throw the eggs in your mouth,” she said.

Edwards received a gift from her late son that helped her through his birthday.

Caleb found Austin’s bookbag and inside it was a Valentine’s Day card that Austin had drawn for his mother but never gave it to her. She figured he was distracted by the candy at Valentine’s and forgot about it. Candy had that effect on him, she said.

“It meant more to get it yesterday than it would have on Valentine’s Day,” she said, Friday. “It was perfect. It was preparing me for today.”

Christmas has come and gone, but Old Man Winter will linger for the foreseeable future. The National Weather Service in... read more