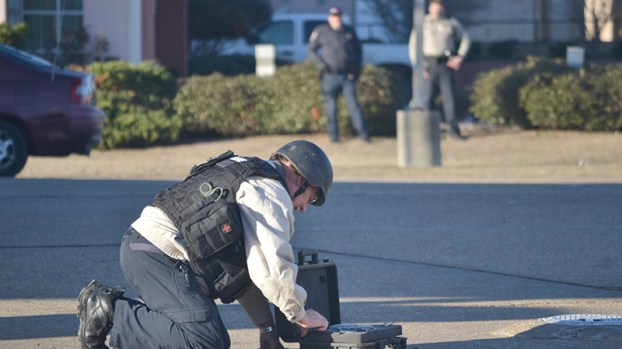 A suspicious briefcase left at a gas pump Thursday at a Brookway Boulevard gas station gave authorities cause to suspect it could contain explosives.

Fortunately, it turned out to be a false alarm.

Lincoln County Emergency Management Director Clifford Galey donned a bulletproof vest and helmet to inspect the black plastic case in the parking lot of the C Store. When he opened it, he found that the case contained gauge equipment.

However, the incident gave law enforcement agencies a chance to receive some valuable training.

A officer with the Mississippi Department of Transportation on scene at the C-Store called 911 and Cpl. Jonathan Alford with the Brookhaven Police Department arrived at the gas station shortly after 3 p.m. along with Lincoln County Sheriff Steve Rushing and deputy Barry Huff.

Law enforcement secured the area and closed the parking lot. Alford moved the box away from the gas pumps.

“I moved it into the parking lot so if it was something that could explode it wouldn’t do more damage or cause more explosions,” he said…

“I can do everything with this but open it,” he said.

Galey is the operation commander for any emergency that requires multi-jurisdictional response. He checked the video surveillance from the store, but could not determine when the case had been left there or by who. He checked the case, but put on the vest and helmet before attempting to open it.

“In handling it, it acted like it was light or possibly empty. He made the call that it was safe to open,” Alford said.

2 Brookhaven women could make a bid to run for Congress

Two Brookhaven public officials are on a list of possible candidates to run for Congress after U.S Rep. Gregg Harper’s... read more