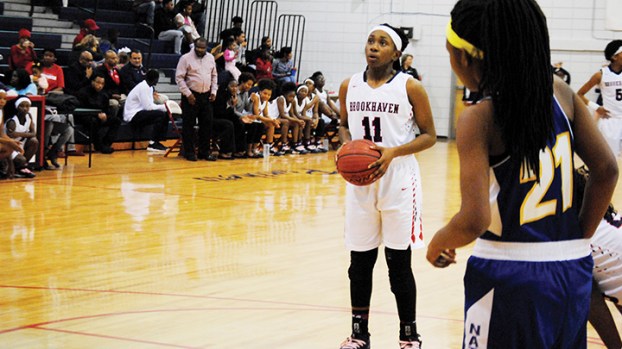 Brookhaven’s Lady Panthers played a balanced game and started off Region 6-5A competition with a 65-46 victory over Natchez Friday.

Both teams started and ended strong, but Ole Brook’s compusre in the meat of the game was the difference. The she-cats got the Lady Bulldogs in foul trouble early on and added 13 points of padding to the scoreboard in the second and third quarters, putting themselves in a winning position for the high-scoring final period.

“We weren’t playing aggressively to start off, but we kept pushing it,” said Lady Panthers junior center Tamia Stallings.

But they played team ball and that was the difference. The Lady Panthers had each others’ backs with 16 assists, and they grabbed up 36 rebounds and took away 14 steals.

“We had to play through the first half to hopefully sustain things in the second half,” said Lady Panthers coach Preston Wilson. “We felt like our defensive pressure would be big for us. We were out of position a good bit, but were able to maintain.”

The girls played each other to an 11-all tie in the first quarter, but Brookhaven’s offense began to assert itself in a 13-7 second. The Lady Panthers led 24-18 at halftime and made some adjustments in the locker room.

“We started slower and we didn’t come out as aggressive. We made mental mistakes, turned the ball over,” said Ole Brook sophomore forward Silentianna Collins. “At half time, coach Preston gave us specific instructions on what plays to run.”

Foul trouble mounted up for Natchez in the third quarter, and the she-cats used their second-half script to capitalize. The Ole Brook defense started to get turnovers and extend the lead to 40-27 at the end of the third.

The Lady Panthers’ shooters showed up in the fourth and extended the lead to 53-34 early on, and Natchez couldn’t calm them down before the game ended at 65-46.

Ole Brook had two players hit double digits. Collins led with 17 points, while Stallings hit 12 from her position under the basket.

The win takes the Lady Panthers to 13-5 on the season. They host Jefferson County in a non-regional game tonight.

It took extra minutes for Natchez to squeak by Brookhaven Friday night, taking the first Region 6-5A game of the... read more