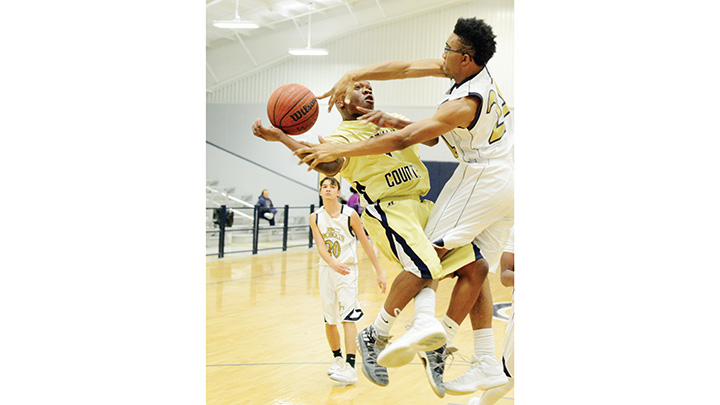 Bogue Chitto’s boys never really found a way to get going against Franklin County Friday night, trailing all game and losing at home 50-30.

The Bulldogs from Meadville got off to a fast start and blistered Bogue Chitto 32-16 in the first half, then held a roughly 20-point advantage throughout the remainder of the game. The second half was a slow burn of fouls, mistakes and slowly-rolling basketballs that broke up the game’s flow and destroyed any momentum either team might have built upon, leaving coaches and players to wonder exactly what went wrong.

“We just came out flat. May have been one of those things where we were looking ahead to the region game against Loyd Star Tuesday night,” said Bogue Chitto coach Mark Pitts. “Either way, it’s a lesson learned.”

Bobcats junior Malik Richardson, who had to leave the game and switch jerseys after someone swiped him on the arm and left him bleeding, was frustrated with the loss.

“We had too many turnovers. We weren’t getting the ball up fast enough, bad transitions,” he said. “We’ve got to step up our game.”

Speed was lacking for the Bobcats, especially in the game’s opening minutes. Franklin County laid bricks over the basket on Bogue Chitto’s goal and led 12-2 with 2:35 remaining in the first quarter. By the half, Franklin County led 32-16.

The Bobcats didn’t do much in the third quarter, scoring only four points while the Bulldogs hung up a dozen to lead 44-20 at the start of the fourth quarter. Franklin County either slacked up or got bored, or both — they scored only six in the final quarter and the game slowed considerably while players took shots for fun after plays were whistled dead and made the officials track down escaping basketballs.

Bogue Chitto used the lazy fourth quarter to add 10 more points, but by then the game was beyond reach.

“We played pretty good — in spurts. We didn’t play a complete game,” said Franklin County coach Rickey O’Quinn. “We left a lot of points on the floor, points we usually make. We stopped getting stops, and Bogue Chitto limited our transition points in the second half.”

Bulldogs senior Jerdice Collins said his team did a good job getting into the gaps in the high-scoring first half then used defense to grind the game out in the second.

“We did a nice job making them swing the ball around the outside,” he said. “We did a good job protecting the middle.”

Senior John Starks, Jr. said it wasn’t the best game his team has played, but he was happy with his colleagues’ ball security and appreciative of the assists thrown in to him.

To score points, Starks said he stays hidden, which must take great skill or some wizardry on a basketball court.

“I just hide around the key,” he said.

The Bulldogs improve to 9-3 with the win. They begin Region 7-3A play against Port Gibson tonight in Meadville.

The loss drops Bogue Chitto to 6-10. The Bobcats travel to Loyd Star to begin Region 7-2A competition tonight.