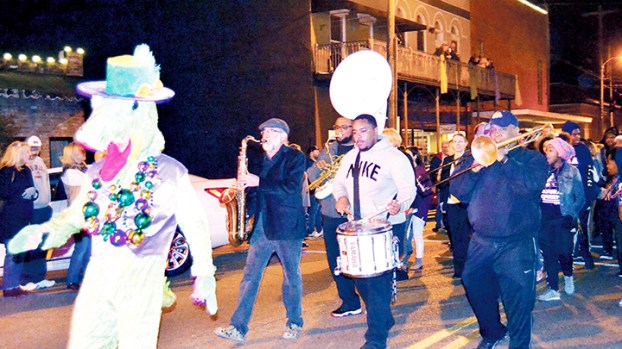 Photo by Donna Campbell/Brookhaven’s second annual “Downtown Jazzed Up” Mardi Gras second-line parade will be Feb. 10. Organizers with the Brookhaven Tourism Council are looking for merchants and restaurants to get involved in the promotion.

Brookhaven’s Mardi Gras parade last year was such a success, its becoming an annual event. “Downtown Jazzed Up” gets underway Feb. 10.

The Epic Funk Brass Band, of Jackson, will lead the second-line parade, beginning at 7 p.m.

It’s that second line that the Brookhaven Tourism Council is counting on to grow each year. They’re also hoping “Downtown Jazzed Up” will bring the New Orleans Mardi Gras feel to historic downtown Brookhaven, said Katie Nations, one of the organizers on the committee.

The Brookhaven Tourism Council is under the umbrella of the Brookhaven-Lincoln County Chamber of Commerce of which Nations is program director.

She said she received positive feedback about the Mardi Gras-themed parade. Revelers enjoyed trying something new, she said.

“They can actively participate in the parade. That’s what the second-line parade is all about. We are the parade,” she said.

“Downtown Jazzed Up” started as a family-friendly event created to show off renovations in the downtown area. It will include live jazz, extended retail hours, private tours and restaurant specials. The actual event begins at 4 p.m. with private tours of businesses and buildings of historical and architectural significance, Nations said. Armbands are $10 and will be available for purchase beginning Jan. 19. The armbands aren’t needed for the parade, concert or street dance, but those wearing them will have access to special discounts and freebies at downtown restaurants. There will also be Mardi Gras-themed surprises along the tour, she said.

Nations said the parade route is extended this year and activities for the children have been added.

“We will have a decorating station for kids to decorate their bikes, wagons and scooters,” Nations said. “Prizes will be given to the most original.”

The decorating station will be set up between Lampton Auditorium and the Brookhaven Public Library.

Organizers are asking that nothing larger than a golf cart be driven in the parade.

The new, extended route will start in front of the Mary Jane Lampton Auditorium on South Jackson Street at 7 p.m. and head down West Cherokee Street, then left onto South Whitworth Avenue, then right on West Monticello Street, then right on South Railroad Avenue. The parade will end at Brookhaven Music and Sound with a concert featuring Epic Funk Brass Band and The Bridge Band. That end of South Railroad will be closed for a street dance, Nations said.

Revelers don’t have to start at the Mississippi School of the Arts campus. They can join in at any time, Nations said.

Members of the Brookhaven Tourism Council will be tossing a few traditional Mardi Gras throws during the parade.

Nations is looking for merchants and restaurants who want to be a part of this year’s “Downtown Jazzed Up.” To get involved, call Nations at 601-833-1411.

“We were so pleased with the turnout and the excitement of it last year,” she said. “It was a great way to show Brookhaven off. Everybody was really festive last year.”

Today is National Law Enforcement Appreciation Day, and, across the country, businesses and organizations are demonstrating support for police officers.... read more