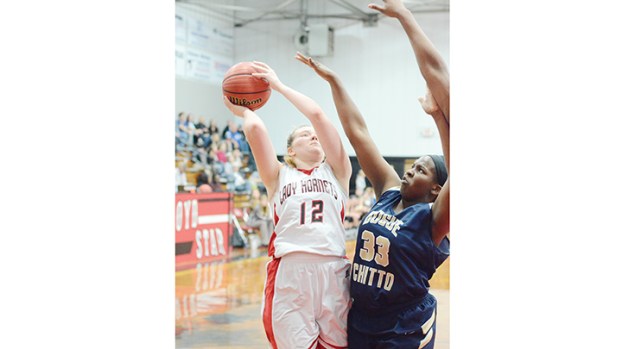 Photo by Adam Northam/Loyd Star junior center Sarah Britt (left) angles back to shoot over Bogue Chitto sophomore Kamilah Clay during Tuesday night’s 49-27 Lady Hornets’ victory. The game was the first in Region 7-2A competition for both teams.

The bucket must have looked mighty small from way out there.

Lady Hornets junior Sarah Britt is her team’s center. She spends all her time in the paint, looking up through the bottom of the net, using her tall frame to pluck rebounds and absorb charges.

It was because of Loyd Star’s slow-down spread offense that Britt ended up out of place at the point, wide open, with a basketball in her hands during Tuesday night’s 49-27 win over the Lady Bobcats. For Britt, the three-point line is just another strip of paint. She had never even attempted a three-pointer in her high school career.

So she fired it up. And it was good.

It was that kind of night for the Lady Hornets, who had everything going their way in the first Region 7-2A battle of the season. They collapsed into the paint to deny Bogue Chitto the easy shots and dogged Lady Bobcats leader, senior Lineka Newson, on defense.

Offensively, Loyd Star protected the ball and bounced it inside to Britt, who led her team with 20 points.

“We were able to get inside and get some good rebounds and put them back,” Britt said.

The Lady Hornets’ second chances were all off rebounds. Their defensive game was pretty conservative, resulting in only three steals, but their 21 total rebounds made up for it. Sophomore Taylor Smith led the way on the boards with six.

Loyd Star also tallied an impressive 15 assists, as its passing game was solid. Senior guard Marley Poole led the team in assists with six from her position as the offense’s director.

“We worked the ball really well tonight, as good as we’ve ever done in a game,” said sophomore Carly Beth Wallace, who buried a pair of three-pointers to back up Britt with 11 points. “We had lots of teamwork.”

Teamwork helped the Lady Hornets start the game fast, controlling Bogue Chitto in a 13-4 first quarter. The Lady Bobcats fought hard to even things out in a strong second quarter, but Loyd Star still enjoyed a 26-14 lead at halftime.

Bogue Chitto’s burst of momentum died away in the third quarter, as they were never able to clamp down on the defensive end of the court. Loyd Star took that quarter 12-7 and dished out more of the same in the final period.

Lady Hornets’ reserve players began hitting the floor with around three minutes remaining in the game and helped wrap up an 11-6 fourth quarter.

“The girls played a good ball game. They executed and did everything I asked them to do,” said Loyd Star coach Gene Britt. “Everything Bogue Chitto did, we were ready for it.”

Britt’s 20 and Wallace’s 11 points were followed by junior Christie Patterson’s eight. Patterson took a shot near the eye late in the game and had to ride the bench with a bag of ice pressed against her face, but was fine post-game.

Despite all the defenders she drew, Newson still led the Lady Bobcats with 10 points. Junior Baileigh Jackson was second in scoring with four points, and junior Cheyenne Hall scored three.

The win improves the Lady Hornets to 7-5 on the year and 1-0 in Region 7-2A. They face the Lady Yellow Jackets of Enterprise tomorrow night in another local region game.

The Lady Bobcats are off until Tuesday night, when they host Amite County in regional play.

The break is mended. The sling is gone. The basketball uniform is clean and white, ready to soak up sweat.... read more