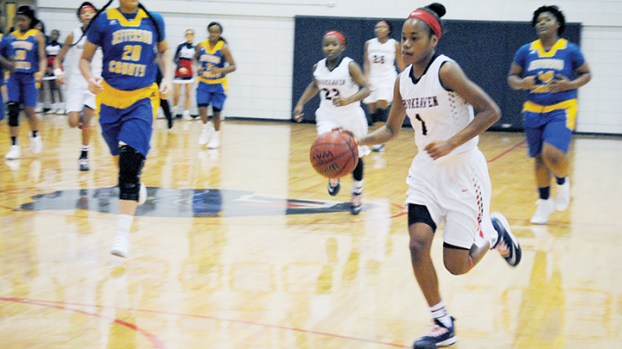 Ole Brook’s Lady Panthers fired off a dominant first half of basketball against Jefferson County, trapping the visiting Tigers in deep pit before going on to win 62-30.

The Lady Tigers had no answer for Brookhaven’s up-tempo attack and fell behind early, managing only seven first-half points while the Lady Panthers marched off with double digits. Ole Brook threw even more offense on the court in the second half and eventually got all 14 Lady Panthers into the game.

Neither team could get separation in the game’s opening moments, and the scoreboard sat at two points each for three minutes. Ole Brook switched to their up-tempo game and it was all Brookhaven from there. The Lady Panthers hit on a seven-point run before Jefferson County could score again and led 11-4 at the end of the first quarter.

The Lady Panthers started the second period with a three-pointer and kept on going. Brookhaven would put up 13 unanswered points during one stretch of the second and led 23-7 at halftime.

“When we play slow, it doesn’t help us. We have to speed up and press,” said Ole Brook senior Taylor Carter. “Let ourselves speed up our defense, to play a better game.”

Jefferson County’s defense managed to take some turnovers from Brookhaven at the start of the third quarter, but the Lady Tigers couldn’t use them. They would eventually get it together and score a respectable 12 points in the third, but they couldn’t stop the Lady Panthers from adding 20.

Ole Brook kept the pressure up in the fourth quarter and continued to add onto their lead. Not going away, Jefferson County kept trying to cut into the scoreboard but Brookhaven’s offense stayed hot, putting up another 19 points in the final period for a 62-30 victory.

“We were able to extend our defensive court pressure and Jefferson County wasn’t able to handle it well,” Lady Panthers coach Preston Wilson said. “We managed to make easy baskets, which made it easier on us. We got after it on defense and made them do things they weren’t used to doing, and I think that was the difference in the game.”

The win takes the Lady Panthers to 14-5 on the season and 1-0 in Region 6-5A. They will travel to Jackson Friday to take on regional opponent Forest Hill.

Jefferson County will make the short trip to Port Gibson Friday night for a Region 7-3A battle.

Brookhaven Academy comes back from Natchez with wins

The Brookhaven Academy Cougars and Lady Cougars collectively notched their 30th wins of the season by defeating the Adams County... read more