Tate Felder has played his last down for Brookhaven Academy football.

The senior defensive back graduates this spring with plans for Mississippi State. He’ll focus on his academic work from here on out. He’s done with sports altogether.

“I think we turned the program this year, with the help from the team before us,” Felder said. “Next year, they’re going to keep going and going.”

For his efforts in the academy’s big turnaround last year, Felder and three teammates have been named to the All-MAIS Football Team for Class AA. Joining him are junior quarterback Dawson Flowers, junior wide receiver Cade Brown and eighth-grade kicker Corey Case.

Coach Ron Rushing said all four award-winners were major influences on the academy’s successful season. After winless campaigns in 2015 and 2016, BA went 9-3 in 2017, running a dizzying offense that took them all the way to the second round of the MAIS playoffs against Centreville Academy.

“All four are great assets for our school. They played really well and we’re proud to see them selected,” Rushing said. “When individual players are honored like that, it’s an extension of our team.”

Felder played both ways last season, recording 66 tackles, two interceptions and two fumble recoveries at defensive back and catching 38 receptions for 601 yards and four scores at wide receiver. He was selected to the All-MAIS team as a defensive back.

Brown had a breakout season at wide receiver, hauling in 67 receptions for 1,103 yards and 14 touchdowns. Firing the ball to him was Flowers, who passed for 2,419 yards and 26 touchdowns, with a completion ratio of 63 percent.

Case, the young kicker, scored 56 total points, hitting 41 points after touchdown and connecting on five of six field goals, including a long of 38 yards.

“Cade Brown is the best wide receiver in the state. Tate worked harder than anyone else. Cory is going to be a great kicker for years,” Flowers said. “Coach Rushing has a great system to be a quarterback. He gave me everything I needed and I had great receivers, so it worked out for me.”

Flowers said the team is growing, and that added depth means fewer players will have to play both sides of the ball in 2018. He thinks the season starting in seven months gives the Cougars a real shot at going all the way.

“I have a good feeling about next year,” he said. “It’s going to be good.” 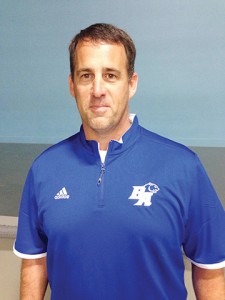 The bucket must have looked mighty small from way out there. Lady Hornets junior Sarah Britt is her team’s center.... read more