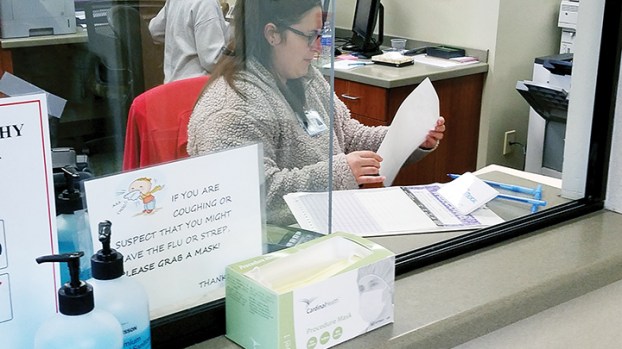 Photo by Donna Campbell/Employees at King’s Daughter Medical Center have seen an influx of walk-in patients during this flu season, which continues through March. Masks and hand sanitizer are available at the check-in.

There is just so much television a sick person can watch.

That’s what Brian Emory has discovered since his self-diagnosis of the flu was confirmed by his doc Wednesday. Emory, director of development at Brookhaven Academy, tested positive for influenza B. He’s wrapped in quilts and freezing, while chugging down fluids and flipping channels.

Because this year’s flu activity is unusually high, officials with the Mississippi State Department of Health are pushing the public to do two things: protect and practice. Mississippians are being asked to protect themselves against the flu and practice basic measures to prevent the spread of flu.

Protection can be pumped out of a bottle of hand sanitizer. Terry Singleton, emergency room manager at King’s Daughters Medical Center, keeps a bottle in his car and his wife carries some with her in her purse. The Singletons have three small children — that’s six tiny hands that need germ killing.

He said that any time they’re out in public, they use the hand sanitizer often.

“That’s a good practice,” he said.

While flu season typically peaks in January through March in Mississippi, the state has already been at a widespread activity level for several weeks.

“Mississippi is seeing the impact of high levels of influenza this season with more than 100 reported flu outbreaks in nursing homes and other long-term care settings,” said MSDH State Epidemiologist Dr. Paul Byers. “Additionally, MSDH has received reports from hospitals across the state that are experiencing increased admissions to ICUs and increased visits to emergency departments which have hospitals operating at full capacity.”

Keith Morrow, director of clinical services at KDMC, said hand washing goes a long way to the prevention of flu. Basic infection control measures can also reduce the spread of flu and should be taken whether or not individuals are vaccinated. These measures include covering your mouth when coughing and sneezing, staying at home when you or your children are sick for at least 24 hours after fever is gone, and washing your hands frequently.

“Don’t spread it to other people,” he said.

Morrow said doctors are treating 30 to 40 additional patients a day who come in to the clinics with flu-like symptoms. About half of those who are treated are testing positive for the flu.

The KDMC emergency room has been busier late at night and on Sundays when the clinic is closed. Chief Nursing Officer Cheri Brooks said they’ve seen “a pretty good rise” of admissions for patients with the flu with the addition of pneumonia. It’s especially prevalent in elderly patients.

Byers said the flu shot is still the best protection against flu-related complications, and while it may not prevent infection, it can drastically reduce the severity and length of illness and prevent serious complications such as hospitalization and even death.

Flu shots are recommended for all those six months and older. The type of flu virus that is primarily causing illness in Mississippi and nationwide is the H3N2 flu strain, which especially affects individuals over 65 years of age and young children, increasing their risk of complications and hospitalization.

Emory said he’s not the type to get sick often — his last bout with the flu was in 2010 — so he’s never taken a flu shot.

“I may have to rethink that now,” he said.

Emory believes he contracted his case of flu from one of his three daughters, who had it a few days before him. He’s staying isolated from the rest of the family to try to squash the spread of it to the others in the house. All five of them had colds over Christmas break so he didn’t want everyone to be sick again.

“It’s like having a cold, but your whole body feels terrible,” he said.

He’s been treating it with alternate doses of acetaminophen and ibuprofen and staying hydrated. Too weak to take care of himself, his wife, Heather, has been his saving grace.

“I probably need to buy her flowers when all this is through,” he said.

Brooks said those who have taken the flu shot are also getting hit with the virus. Nevertheless, the Center of Disease Control advocates getting the shot.

“If they prevent 30 percent of the cases, they consider it a good year,” she said.

While KDMC is not restricting visitors at this time, the public can assist in the efforts to reduce the spread of flu:

• If you are ill do not visit family or friends — ill visitors should wait at least 48 hours after symptoms resolve before considering a visit.

• Do not take groups to visit, or accompany family or friends to the hospital/healthcare facility or emergency department.

• Limit or don’t take children to visit at the facility.

• All visitors should cover coughs and sneezes and practice hand hygiene.

• Visitors should only visit their family or friends; they should not visit or have contact with other patients or residents.

• Patients, families and visitors should follow any additional recommendations or restrictions set forth by the healthcare facility.

Finally, medical experts say a little patience goes a long way. As waiting rooms remain full with patients who may or may not have the flu, be patient. Singleton said it’s not unusual to wait several hours to see medical personnel during peak times.

“We’re doing everything we can to see you in a timely manner as possible,” he said.

What does Freedom of Religion mean to you?

This is part of a series of stories about protections guaranteed by the First Amendment. We aren’t supposed to do... read more