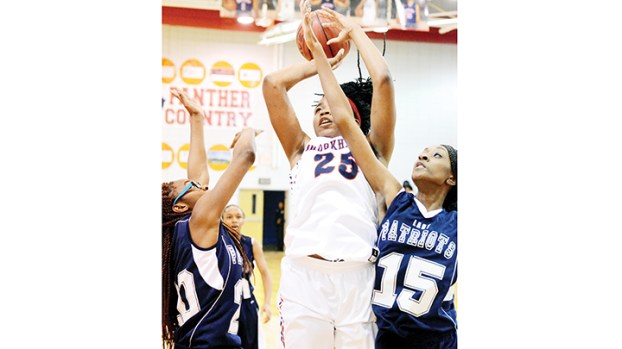 Brookhaven’s Lady Panthers got loose on a late-game run against Forest Hill Friday night, breaking open what had been a close game and picking up a 59-31 victory in Region 6-5A.

Leading by just five points at halftime, Ole Brook started the third quarter by doing what it always does in a jam — attacking inside with junior center Tamia Stallings, who converted three and-one baskets on her way to a 10-point outing in the third period. Five other Lady Panthers moved the net in the same quarter, and the Lady Patriots’ hopes collapsed under the weight of Brookhaven’s 24-6 run.

“My teammates got the ball in to me and I finished,” Stallings said. “After the first half, we just had to get focused.”

The big feed to Stallings opened up the court for Brookhaven’s shooters, who fed each other with 14 assists. All 14 Lady Panthers got in the game, and nine scored points.

One of those was junior Dymonde Washington, a reserve player who turned in a great game and backed up Stallings’ third-quarter assault with six points of her own.

“We got mentally focused in the second half and we had good hustle as a team,” she said. “We have the speed, we just have to use it.”

Ole Brook played a back-and-forth opening half, threatening to break the game open early but never quite getting there. The she-cats outperformed Forest Hill 11-7 in the first quarter, but the Lady Patriots played an even second quarter to keep the game close, 21-16, at half.

After the Lady Panthers’ broke them in the third quarter, Forest Hill couldn’t muster any real resistance in the final period. Brookhaven doubled them up, winning the final segment 14-7 with reserves getting time.

It wasn’t a perfect game for Brookhaven. The home team pulled down an impressive 43 rebounds, but Forest Hill was right there with 41. Neither team brought their pry bars — Ole Brook took away only six steals, while the Lady Patriots wrenched out only three.

Shooting was also poor, with the Lady Panthers hitting only 39 percent of their field goals.

“At halftime, we talked about where we were defensively. We were in bad position a lot,” said Lady Panthers coach Preston Wilson. “Rebounding is one of our biggest weaknesses right now. But we were able to pick it up in the second half, we got in position like we needed to be and were able to capitalize on some turnovers.”

Lady Patriots coach Charles Moore sat on the floor in the hallway alone after the game, waiting for his girls to emerge from the dressing room. His mind wasn’t on Brookhaven, but on his own team and where they missed — the Lady Patriots shot only 17 percent and failed to record an assist.

“We couldn’t make our shots, we had a couple missed assignments, we got in foul trouble,” he said. “Brookhaven played good defense.”

The Lady Panthers defense was powerful, but it was shooting that won the game.

Stallings led her team in scoring with 24 points, going eight of 11 from the free throw line. Freshman Ashanti Louis backed her up with nine points, and Washington totaled eight.

The victory takes the Lady Panthers to 15-5 overall and 2-0 in Region 6-5A. They host region opponent Wingfield Friday night.

The season has been unkind to the Lady Patriots. The loss is their 14th of the season, and they begin regional play at 0-1. They travel to Natchez Friday night for another region contest.

Forest Hill was slamming early with a pumped-up visitors’ crowd screaming for more, and Brookhaven just had to hunker down... read more