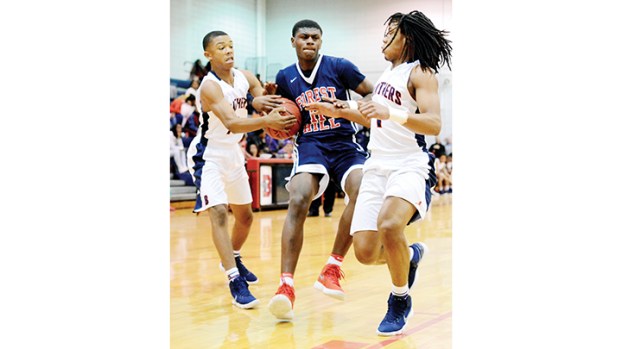 Forest Hill was slamming early with a pumped-up visitors’ crowd screaming for more, and Brookhaven just had to hunker down and take it in a 74-53 home loss Friday night.

The Panthers fell behind early to the quick Patriots, who handled the ball with great precision to free up giants in the lane for easy layups and a handful of big-time dunks that sucked the energy out of Ole Brook. The home team trailed by 18 points at halftime and was never really able to get back inside that roughly 20-point circle, as Forest Hill had an answer for all the Panthers’ schemes.

“Their length really affected our passing,” said junior Lafollette Bogan. “We had too many turnovers and we didn’t execute our plays. Next time we play them, we have to get more bodies crowded around the goal and take care of the ball.”

At 6-foot-2, Bogan is one of the tallest Panthers, but even he was staring into the necks of the big guys from Forest Hill. Those long bodies and long arms caused Ole Brook to turn the ball over 15 times, with only six steals going the other way.

Brookhaven’s low boards were also a telling stat — 26 total rebounds, 14 on defense and only a dozen on offense. The cats just couldn’t get to the right altitude to soak up runaway basketballs.

The Patriots also magnified Ole Brook’s shooting woes. The Panthers hit only 34 percent of their field goals and went three of 14 from the three-point arc. Close-range baskets were hard to come by.

Coach Marcus Flippin knew his team was in for a tough night.

“Man, if we would have beat them it would have been Christmastime again,” he said. “They’re quick, strong and their big guys can play.”

The Panthers will have to face Forest Hill again next Tuesday in Jackson, and possibly even a third time depending on how the tournament lines up. Flippin said his team will need more awareness against the Patriots next game — particularly against Forest Hill senior Ladarius Marshall, the main mountain that did all the dunking.

“A guy like that, you gotta know where he is all the time and keep him away from that basket,” he said. “The referees will only let you do so much. You can’t just grab him by the shirt.”

Flippin tried fighting size with size, but it didn’t work out too well. Ole Brook’s own big man, sophomore Kadarius Wells, tried to check Marshall late in the game and both players ended up hitting the court hard.

After the crash, Marshall chewed his lip, visibly aggravated with Wells. With the game already out of hand, Flippin pulled his man out of the game to keep everyone cool.

“I already knew Brookhaven would be scrappy and play tough, especially here in their home gym,” he said. “The plan for next time, when they come to us, is to play hard. That’s the plan every time.”

Bogan led the Panthers in scoring with 23, while junior John Hilbert backed him up with 15. Senior Richard Marshall and freshman La’darius Thrasher scored five each, while junior Axavian Jones scored three. Wells rounded out Ole Brook scoring with two points.

The loss drops Ole Brook to an even 10-10 on the season, and they remain winless in Region 6-5A. The Panthers host Wingfield Friday night in region play.

Forest Hill improves to 15-5 on the season and are 1-0 in the region. They are off until next Tuesday night when they welcome Brookhaven for a second game.

Brookhaven’s Hilbert said his team would be reviewing their losing effort from Friday night, looking for advantages.

“I know we can beat them, but we’ll have to play a near-perfect game,” said Hilbert. “Against that size, you gotta keep a body on them at all times, keep fighting. We’ve got film on them now, so we have to watch it and learn.”