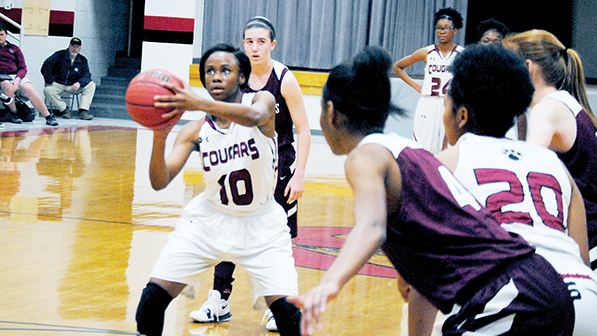 The quick-striking Lawrence County Lady Cougars took down Region 7-4A opponent FCA Tuesday night by a final score of 40-21.

The win keeps the Lady Cougars undefeated in regional play at 6-0 and gives them a 20-3 overall record. The loss drops the Lady Aggies to 4-15 overall, 1-4 in Region 7-4A.

The Lady Cougars fired the ball at will and put the Lady Aggies in a deep hole at halftime. FCA had no answers to stop the she-cats in the second half, and Lawrence County cruised to victory.

Lady Cougars’ junior guard Kyunna Thomas said, “We started slacking on defense, but I would say we did good. We came out after halftime and started doing our thing.”

The Lady Cougars opened up the game by going on a six-point run before the Lady Aggies could record their first basket. The she-cats kept the offense going, as they led 14-3 at the end of the first period.

The Lady Aggies tried to dig out of the first period hole, getting more shots to fall. The Lawrence County girls pressed their offense hard with time running down to take a 26-13 lead into halftime.

The third quarter saw neither team able to get a basket to sink early on. The Lady Cougars ended the scoreless quarter, and halfway through the Lady Aggies finally got a shot of their own.

With the game in hand, the she-cats put their young players in with just over two minutes left to play in the game. Once the final buzzer sounded, the Lady Cougars had picked up a 40-21 victory.

Lawrence County will be in action Friday night as they take on Purvis in Region 7-4A action.