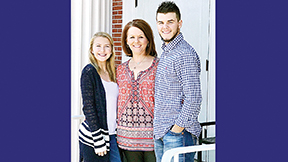 Submitted photo/Stephanie Reynaud and her two children, Maggie and Reese, are continuing to make music as Gloryland. They are part of the Legacy Concert Series that will be hosted today starting at 5 p.m. at New Prospect Baptist Church. The concert is held in memory of Reynaud’s father, Chuck Rushing, as well as Ray Gates and Sonny Riley.

Memorial sing declares ‘It is well’

Three friends who loved singing gospel music will be remembered with the songs they knew best.

The third annual Ray Gates Memorial Singing has been renamed the Legacy Concert Series to honor not only Gates, who died in 2014, but also his two buddies, Chuck Rushing and Sonny Riley.

Rushing and Riley both died in 2017 just four months apart.

Both men had been part of the concerts that paid tribute to Gates.

The Legacy Concert Series will be today from 5-8 p.m. at New Prospect Baptist Church at 691 Hwy. 84 West.

Rushing’s daughter, Stephanie Reynaud, is one of the organizers of the concert.

“This year we wanted to expand it to honor my dad and Mr. Sonny as well,” she said. “Sonny, Ray and my dad were the greatest of friends. They were so close.”

Riley and Gates sang with Hosanna. Rushing sang with Gloryland Quartet, a group that included his daughter and his grandchildren Reese Reynaud, 19, who works as a lineman for Pike Electric, and Maggie Reynaud, 13, a seventh-grader at Alexander Jr. High.

When Rushing died from pulmonary fibrosis June 1, they knew they’d never be a quartet again.

“We decided we’re not going to add anybody,” she said. “You can’t fill his shoes, and nobody can take his place.”

She said her dad continued to be an inspiration, even when the disease reduced his lung function to just 20 percent. He’d sit on a stool with his oxygen tank at the ready. He wasn’t going to let a terminal illness get the best of him, she said. He kept singing full time.

She said there was no talking him into slowing down, even while they worked to get him on a lung transplant waiting list.

“No matter what, that was not going to slow him down,” she said. “You weren’t going to tell him to slow down, as long as he could put one foot in front of the other.”

Reynaud said her family’s faith they learned from her father is what keeps them going. They are happy to know he’s not suffering.

“It’s been tough without him,” she said. “We’re a small family. We have clung to each other and we know that he is having a much better time where he is. This is what he sung about. This is where he knew he was going.”

One song Gloryland will sing tonight is “It is Well With My Soul.” They sing it at every show, in honor of Reynaud’s father and her children’s grandfather.

He loved that song so much that the family had a line engraved in his headstone: “Whatever my lot, thou hast taught me to say, it is well, with my soul.”

“Every single time we sing, we sing ‘It is Well with my Soul,’ we do that for him, every time,” she said.

When a Maine transplant stopped in the Brookhaven Dairy Queen for a quick bite to eat, he didn’t know a... read more