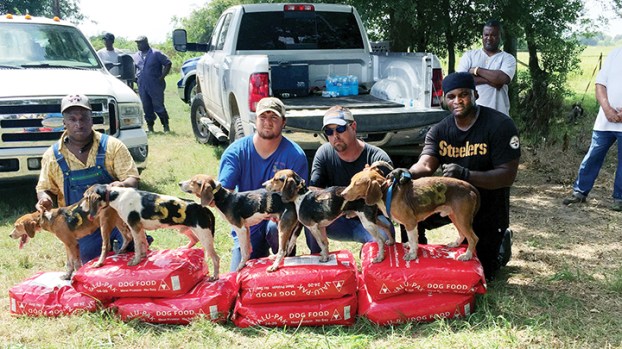 Photo submitted/The Rev. Andy May of Jayess said someone poisoned several of his registered beagles, which he uses for rabbit hunting competitions. Pictured are, from left: May with Twister and Eazy Money, Josh Ely, Justin Magee and Bryan Boatmon. The four men placed in a competition held last year in Church Point, Louisiana.

A Jayess pastor who raises beagles for competition rabbit hunting posted on his Facebook page a photo of five dead dogs that he said were poisoned.

Each share gets him a little closer to justice, he said.

May, who studied at Copiah-Lincoln Community College, is pastor at Full Gospel Church of God in Christ in Jayess. In his spare time, he raises registered beagles.

His plan is to breed beagles for competition. But after the tragic discovery of the dogs’ bodies in their pens Friday morning, he’s not sure if that will be possible.

“I’ve never had any problems before. I’ve been running them there for 30 years. Nobody’s ever said anything,” he said.

He doesn’t usually run his dogs during deer season, which will end Wednesday, out of respect to his fellow hunters.

“We came to a mutual sportsman’s agreement,” he said. “I was waiting until February to start to hunt. I didn’t want to interfere with the deer hunters. It’s always worked out in the past. We’ve never had a problem.”

But the dogs hadn’t been out in a while so he let them go for a romp through the woods on his uncle’s land after dark when hunters wouldn’t be out.

“It’s just like a child. You take them to the playground and let them play,” he said. “Most of the hunters in that area know that I’m a quiet, subtle guy and that’s where I run my dogs. I run a little bit at night to keep my dogs in shape.”

He and his friend let the dogs go and they jumped a few rabbits. He said he found a domestic pig that had been there for a while so they decided to burn it so the dogs wouldn’t get to it.

While they were doing that, he heard the dogs “fussing” over something behind his truck.

“Someone had thrown pieces of meat on the side of the road,” he said. “When I got back there, they were eating this stuff. They’d consumed most of it.”

He managed to get a chunk of it from the four dogs that were fighting over it, and didn’t consider that it would be poisoned, so he threw it on the fire with the pig.

“I’m not thinking anything bad about it at this point,” he said.

He put the dogs in their pens, but didn’t get home until 9:30 p.m. Thursday, so he figured he check their food and water the next morning.

When he went to the pens Friday morning he was devastated by what he found.

“Buckeye was dead. The dog next to him, Scooter, was dead,” he said.

“I didn’t know how many more were going to die,” he said.

A fifth dog, that belonged to a friend, also died. He hadn’t been on the run with the other dogs, but he was in the pen with Scooter. May believes Scooter vomited and bled out and the other dog ingested the poison and died.

The four dogs that died were the same four that had been fighting over the meat, he said.

May talked to a veterinarian who suggested he get the dogs necropsied in Jackson, but after reporting the incident to the Mississippi Department of Wildlife, Fisheries and Parks, he was told to pack the dogs on ice and game wardens would take them. They picked them up Saturday, he said. MDWFP is in charge of the investigation.

May believes someone deliberately poisoned his dogs.

He had plans to breed beagles for field competitions. All that’s on hold now.

“I won’t be able to trust to go back for a long, very long time. If these people are never brought to justice, they’ll have the chance to put this out again. I can’t chance putting my dogs in harm’s way. For me, it will change everything,” he said.

The comments come from all over the world.

“I was not expecting anything of that sort,” he said. “I’m overwhelmed with emotions that people care so much for the animals that we have. It’s also shocking to know that all of the results are coming in with people that are having the same problem — Alabama, Ohio, Kentucky — with people putting poison out to kill their pets and nothing’s being done about it.”

May also received some negative comments.

“It’s good and bad,” he said. “I don’t worry about it though because I know I didn’t do anything wrong. They’re bred to hunt and chase rabbits. It does their heart good to know that they’re doing their best to make me happy.”

May wasn’t sure that as a pastor, he should make the claims that someone deliberately killed his dogs.

“I was caught between pastoring and bringing this forward,” he said. “Then it was like a voice spoke to me, ‘They can’t speak for themselves. You’re going to have to speak for them.’”

May is waiting for word on the investigation from MDWFP and will update his Facebook page when there is new information.

“I feel like I’m obligated to keep people updated on the situation,” he said.

If anyone has information about the crime, Mississippi Department of Wildlife, Fisheries and Parks South Regional Office can be reached at 601-783-2911.