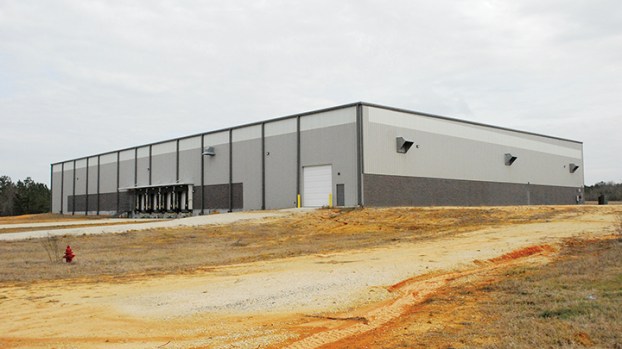 Photo by Trapper Kinchen/The 50,000-square-foot spec building in Linbrook Business Park was built one year ago.

The Brookhaven Lincoln County Economic Development Alliance oversees the structure’s maintenance, and, according to the association’s Executive Director Garrick Combs, the building has garnered a great deal of economic interest since its completion.

“From a regional standpoint, Brookhaven and Linbrook provide a lot of industrial and occupational draw,” he said.

The county and city years ago put up $2.2 million each, along with the Chamber’s $500,000 and a $1.1 million grant from the Mississippi Development Authority to build the park.

Combs said the spec building lies at the center of the Development Alliance’s marketing plan for Linbrook. In the past 12 months, 92 percent of company inquiries concerning the industrial park have been directly linked to the new structure.

“This is the only industrial property we have under our control that is also marketable,” he said.

Lincoln County Chancery Clerk Tillmon Bishop said the Development Alliance has been present at several economic development gatherings to “talk it up” to the right companies.

“We’ve had several companies inquire about the building,” he said, adding that there’s been more talk about it recently than in the past six months.

He said supervisors have heard about at least two companies interested in the building and the site, but because it involves possible economic development, it’s been discussed in closed-door, executive session “because of the confidentiality.”

Bishop is confident that the building will have a tenant.

“We hope to have a tenant in there as soon as possible, but it all depends on them,” he said.

To help preserve its structural integrity, the building is equipped with an alarm system capable of alerting local authorities in case of burglary, vandalism or fire.

Combs said the city pays roughly $50 per month to furnish Linbrook with electricity, which is a relative bargain considering the spec building’s massive size. Southwest Electric — the power company responsible for servicing the industrial park — has given the Development Alliance a special pricing rate until a tenant moves into the new structure. According to Combs, the modified electrical fee exponentially cuts down on utility costs.

“There’s not a whole lot of upkeep in terms of expense,” Combs said. “On top of the light bill, we have a contract with a landscaping company to maintain the landscape around the Linbrook sign, but that doesn’t cost much at all.”

Over the past year, the Development Alliance has carefully followed the guidelines put forth by the Mississippi Department of Environmental Quality for reseeding the park’s lawn and monitoring its storm water drainage.

“We prepared a little over 100,000-square-feet of pad for the building site,” Combs said. “Now, we’re working to keep the site well tended.”

He also said the Development Alliance is working diligently to lure industries to Linbrook that mesh well with the available, regional workforce. Ideally, Combs would like to see metal fabrication businesses, automotive manufacturers, plastics manufacturers or timber companies occupy the park.

“I think we are really well positioned for negotiations,” he said. “We’ve already filled up one industrial park. That shows you how regionally competitive we really are.”

The family of a man last seen in Heucks Retreat are concerned for his well-being. Lincoln County Sheriff Steve Rushing... read more