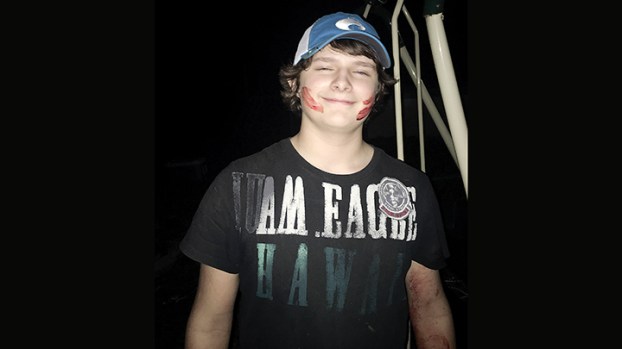 Boy has too much fun skinning first deer

I’d always thought skinning a deer was a solemn ritual.

In my mind, I saw it as an ancient act of primacy that connected modern man to ancient times, to his great hunter-ancestors and the bounty of the land, a process that established him in his God-given place atop the great, spinning cycle of life on Earth.

Then I watched my 14-year-old son, Timothy, bury his arm to the elbow in a pile of deer guts and bring up bloody fistfuls for a closer look while hollering, “Dude! Check this out!”

The magic is gone now.

I came home late from a basketball game in Bogue Chitto and found them working by porchlight, he and his friend, T.J. Walker, skinning Tim’s first deer. Tim, who had never cleaned a carcass before, wielded the knife. T.J., who had the knowledge but not the means — both wrists were in casts from a four-wheeler wreck weeks ago — gave the instructions.

So the two Wesson freshmen worked together, the lame leading the unlearned, which I think is a pretty good way to describe most of their activities, no matter which one is in charge.

They had dragged the old swing set over to the back door and strung the deer up from the main bar, head down, using what looked like a quarter-mile of thin, white rope and a dozen questionable knots. The swings on their rusty red chains were missing. I didn’t ask where they’d gone.

They’d already peeled off the doe’s hide, except for a skinny brown mohawk of fur between her shoulder blades that didn’t seem to concern them. It irritated me, like leftover white skin on a peeled orange. I wondered why they’d left it. I didn’t ask.

It’s best not to ask questions when two teenage boys have taken initiative. The wise course is to simply stand by with ready counsel and let them take the measure of life’s standards for themselves, like God with a plumb line in the Book of Amos. The Israelites didn’t listen, and these stalwarts of inexperience in the steel grasp of know-it-all adolescence wouldn’t listen, either.

It was a big moment in a young man’s life, a step toward the ascension to manhood, and I looked on with approval at the bloody transformation from boy to man, from dependent to provider.

Then, he ruined all my fancy thoughts.

The first thing he did was swing his knife like an axe and slice a foot-long hole into the bowel cavity. He should have screamed “hi-ya,” or “Ginsu-chop.” T.J. and I winced. I still don’t know how he missed cutting open the guts.

“Why not?” he turned back, looking annoyed.

He spread her open like a big book and the viscera dangled before him. They already had a deep tote underneath to catch the guts, but instead of raking them out and getting on with the meat harvesting, he just stared into the organic mass.

I was afraid he would be sick. The stench was awful. Could this be an obstacle on the road of pride?

He held up something pink and gooey. Something even pinker and gooier prevented it from coming loose, and the knife flashed. Now he had it.

The road of pride was open, after all.

One by one, he yanked out little blue kidneys, a big gray liver, chunks of heart and lung liquefied by the .308. Each one he squeezed, weighed, held up close for inspection, sniffed. For a second, I thought he was going to chew on the pancreas.

The solemn ritual became a red-armed science fair. T.J. dabbed blood on Tim’s cheeks, supposedly first-kill tradition. There was talk of eating raw heart, but I shut it down. His mother would have skinned us and left the deer to rot.

He finally got around to cutting off the back straps and hindquarters and icing them down. Then he took my Chevrolet — somehow, deer hunting always revolves around him driving my truck around — across the farm to bury the leftovers.

Next morning, we dropped off more than 30 pounds of venison at the butcher’s to be made into sausage. The man in the apron said they cut the back straps too thin, and some of the meat was dirty and would have to be cut away. He also said to tell Tim and T.J. they did a pretty good job for 14-year-olds.

“I’ve got 60-year-old men, been doing this all their lives, who do a worse job than they did,” he told me.

Tim was happy to hear that. I’m afraid the puffed-out chest he’s developed is going to ruin his T-shirts. It’s like there’s another man in my house now.

At least that’s what he thinks.

Sports editor Adam Northam can be reached at adam.northam@dailyleader.com or 601-265-5305.

Lady Wolves rally to win in OT against Pearl River

The Copiah-Lincoln Community College Lady Wolves scored 30 points in the second half and 10 in overtime Monday to grab... read more