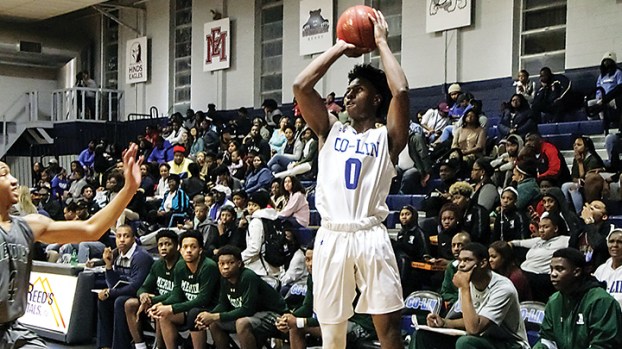 Photo by Co-Lin Athletics Information/Wesson’s Anthony Jones goes skyward for a three-point shot Monday night at Pearl River, where the Wolves recorded only their second loss of the season.

The Wildcats could not seem to miss, as they shot 46 percent from the field. The loss moves Co-Lin to 14-2 on the year and 5-2 in the MACJC South Division. Co-Lin is now tied with the Wildcats for first place in the division.

The Wolves struggled on the glass Monday night as the Wildcats out-rebounded them 45-27, which resulted in fewer opportunities for Co-Lin. That, combined with PRCC’s hot hand, kept the Wolves at bay for most of the contest.

Co-Lin led early in the game, as the Wolves took a five-point lead in the first three minutes of play, but unfortunately the Wildcats answered and took a 13-11 lead with 15 minutes remaining in the half. Co-Lin responded and tied the game on the next possession at 13 all, but Pearl River once again took control and never gave up the lead for the remainder of the game.

The Wolves trailed by 14, 49-35, going into the locker room, but came out with a vengeance. Over the first 12 minutes of play in the second half the Wolves cut the Wildcats’ lead to 10 three different times. Unfortunately for Co-Lin, the Wolves were unable to continue to get stops, while PRCC was scoring on nearly every trip down the floor.

Youry White led the Wolves in the scoring column with 20 points, and led the team in rebounds with seven. Anthony Jones scored 12 for Co-Lin, while Damarius Brooks rounded out the Wolves’ top scorers with nine. Darrian Wilson led the team with four assists, while Jonathan Floyd had three.

The Wolves take on the Jones County Junior College Bobcats Thursday at 7:30.

The Brookhaven Academy Cougars and Lady Cougars traveled to Natchez Monday evening to take on the Cathedral Green Wave for... read more