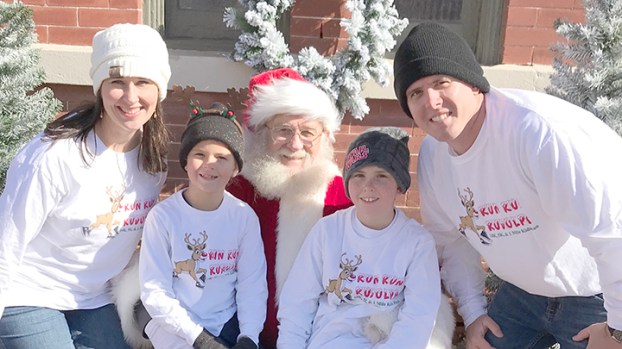 Submitted photo/Jennifer and Steven McMorris of Defining Moment Events, with their children Elizabeth and Bradley, visited with Santa at the afterparty for their Run, Run Rudolph race in December. The McMorrises were able to donate many items that were collected for Toys for Tots at the event. Their next race is the Cupid Shuffle Feb. 17 with donations collected for Habitat for Humanity of Lincoln County.

Cupid Shuffle to benefit Habitat for Humanity of Lincoln County

The prizes at the end of the Cupid Shuffle are Valentine cupcakes and hot chocolate, and bragging rights for the winners.

The 5K set for Feb. 17 is the first organized this year for Defining Moment Events, a company started in the fall by Steven and Jennifer McMorris.

Together they’ve started the events company with hopes to bring more than races to the area. They want to get into the wedding market to help plan the big events and also offer DJ and video production services. Steven McMorris said they will eventually add to the entertainment scene by bringing concerts and shows to the area.

“We’re exploring all those opportunities,” he said.

For now, the race is on. They had already been participating in runs and had helped organize them for others so it was a good place to start their business.

They created the five-part Ole Brook Run Series to showcase five races planned this year, starting with the Cupid Shuffle.

Registration will be open until the morning of the race, but Thursday is the last day to register with a guaranteed event T-shirt in the size of choice. After Thursday, the shirts are first come, first serve with limited sizes.

Any of the races can be run individually, but anyone who runs all five will receive a special finisher medal. The McMorrises also offer an incentive for those who pre-register for the series — the fifth race is free.

The couple’s children — 9-year-old Bradley and 7-year-old Elizabeth — also run. That’s why the family likes to include a 1-mile kids run for children 12 and under. Parents are welcome to run with their children at no charge, but awards will only be given to registered participants.

“We found a lot of families are doing it together,” McMorris said. “We want to get kids involved in that activity at an early age. The more we can get kids active the better it is plus there’s that sense of accomplishment when they cross the finish line and get a medal around their neck. That smile is worth it.”

It was Bradley McMorris who offered the suggestion that emphasizes the company’s core value of giving back to the community.

When they approached their children with the idea of starting a business, Bradley told him, ‘That sounds like an awesome idea. We can give all the money to charity,’” he said. “I laughed, because that doesn’t help the business aspect of it.”

But they liked the idea and decided to tie a charity to each of the five runs planned this year.

In the summer, it’s the Splash Dash with a school supplies drive, for Halloween it’s the Trick or Treat Trot with a canned food drive, in November it’s the Run to Remember for Memorial Day. For that they’ll be accepting donations for the Wounded Warrior Project.

At Christmas, they hope to duplicate the success from the first Run, Run Rudolph and have a toy drive again.

For the Cupid Shuffle, donations can be made at registration for Habitat for Humanity of Lincoln County. A portion of the race proceeds will also be donated to the charity, McMorris said.

What sets Defining Moment Events races apart from other 5Ks is the finish-line afterparty, he said.

“We want our events to stand out and be different from other 5Ks,” he said. “We want to give people something fun to stick around for. We’re just trying to make our events unique and stand out.”

The McMorrises are open to sponsorships of any of their races. For more information, call 601-990-4403.

Race day registration for the Cupid Shuffle is from 7-8 a.m. in downtown Brookhaven by the Brookhaven-Lincoln County Chamber of Commerce on South Whitworth Avenue.

Registration for the 5K is $30 in advance or $40 on race day, which includes a T-shirt, finisher medal, bib, swag bag and the party. T-shirts after Thursday are not guaranteed.

Registration for the kids 1-mile run is $10 in advance or $15 on race day. It does not include a T-shirt.

All participants who finish the race will receive a finisher medal. Awards will also be given to overall winners (male/female), as well as to age group winners, three deep in each age group. Volunteers are also needed to serve at water stations, registration and check-in, setup and cleanup and the afterparty. Volunteers will receive a free T-shirt.

A man missing from Lincoln County was found safe Tuesday night in a nearby state. “He was with a friend... read more