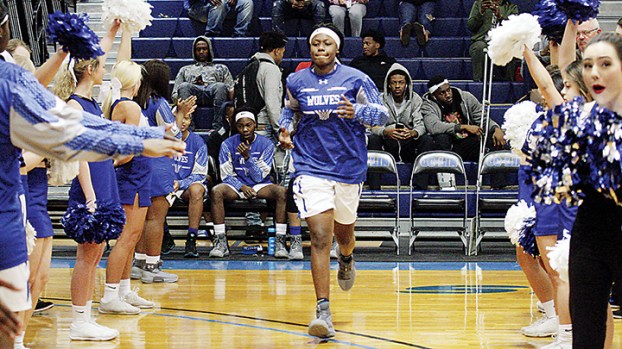 Photo by Co-Lin Athletics Information/Jackson’s Brittany Rose enters the court Monday night at Pearl River, where the Lady Wolves grabbed their 14th victory of the season.

Lady Wolves rally to win in OT against Pearl River

The Copiah-Lincoln Community College Lady Wolves scored 30 points in the second half and 10 in overtime Monday to grab a 63-58 MACJC South Division win over Pearl River.

The win moves the Lady Wolves to 14-2 on the season and 5-2 in the division, second place behind Jones County at 7-0.

The first quarter looked great for the Lady Wolves, as Co-Lin was able to find the basket from all parts of the floor and from a variety of players. The Lady Wolves led by 10, 13-3, with just 2:33 remaining in the quarter.

In the second, Co-Lin again stretched the lead to 10, 18-8, before Pearl River went on an 18-3 run led by Rehema Franklin. The offensive burst gave the Lady Wildcats a five-point, 26-21, lead with just 16 seconds remaining in the half. Co-Lin’s Brittany Rose nailed a jump shot at the buzzer to cut the lead to just one, 26-25, going into the half.

PRCC pulled out to an eight-point advantage in the third, but Co-Lin rallied. A 12-2 Co-Lin run gave the Lady Wolves a 40-38 lead going into the fourth.

The fourth quarter was back-and-forth as the game was tied four times in the final 10 minutes. The Lady Wolves led by three, 53-50, in the final 15 seconds, but Pearl River’s Franklin hit a corner three with just 11 seconds on the clock. Co-Lin’s final possession was unsuccessful and the game went to overtime.

Alexus Holt hit a three-pointer on the Lady Wolves first possession of the extra frame and the Lady Wolves never looked back. Kyeonia Harris was solid for Co-Lin in the final minutes of overtime, as she went 5-for-6 from the free throw line to solidify the win.

Rose led the Lady Wolves with 22 points after going 4-for-6 from three-point range. The sophomore from Jackson also hauled in six rebounds and had four assists. Harris posted 14 points and Holt scored 11. Holt led the Lady Wolves in assists with five. Karry Callahan led Co-Lin on the boards with 12 rebounds.