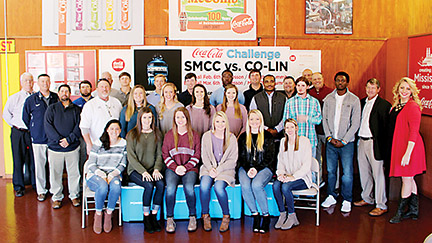 Photo submitted/Players, coaches and Coca-Cola officials held a press conference this week in preparation for the 14th annual Coca-Cola Challenge presented by Powerade, a baseball and softball series between Copiah-Lincoln Community College and Southwest Mississippi Community College. The first softball games will be Tuesday afternoon.

There may still be a few showers here and there, but temperatures are “seasonable,” or “mild,” for February, with temperatures slowly climbing and a fat, old sun beating down with increasing warmth as the calendar turns to March.

The weather is just right for baseball and softball.

Copiah-Lincoln and Southwest Mississippi community colleges are preparing for the 14th annual Coca-Cola Challenge, presented by Powerade — or, as it’s commonly called, the Coca-Cola Classic.

The Lady Wolves and Lady Bears will compete in a four-game series, with the first game at 3 p.m. on Tuesday, and the second at 3 p.m. on March 6. The gentlemen will face off in a two-of-three baseball series at 6 p.m. on March 6 and again on March 27, at the same time.

Local athletes will have some major roles to play on the two colleges’ teams in 2018.

The most responsibility will fall on the shoulders of sophomore Bears outfielder T-tez Cole, a graduate of Lawrence County High School. Cole is one of only a few veterans on a very young team, and it will be up to him to help the freshmen adjust.

“It’s going to be a learning process for them, and a leadership process for me,” he said. “I’m ready for the role. Back at Lawrence County, it became normal to me. I didn’t say much, I just tried to set the example on the field, playing hard every game.”

“He’s a low-key guy, not a ‘rah-rah’ guy. He might be in the weight room, and you won’t even know he’s in there,” Jackson said. “He leads by example. That’s one thing we’ve got — the guys back from last year do a great job leading this team.”

On the other end of the experience spectrum, freshman Lady Bears short-stop/second base Terrah Nelson said she used the short, fall softball season to adjust to the speed of the game at the college level. The 2017 Bogue Chitto graduate said her new team is talented and ready for the season.

“I’ll probably be a little nervous for the first game, but I’ve been in some big games before with Bogue Chitto, so I should be ready,” she said.

Nelson’s Bogue Chitto team went 24-7 last year and won the 1A state title. She expects the Lady Bobcats to be a force in their new 2A region in 2018, too.

“They lost two of us last year, but a lot of starters are returning,” she said. “They’re moving up to 2A, but I think they can handle it.”

Southwest softball coach Shea Johnson said Nelson was a big recruit for the college, and he expects solid play from her.

“If you have a game on the line, you want kids like Terrah,” he said. “She comes from a well-coached team. They do a great job of getting their kids ready. She’ll step right in and be an impact player for us, probably our starting second base.”

The Lady Wolves have a pair of local freshmen on the squad — Lawrence County’s Callie Fortenberry and Loyd Star’s Makenzie Smith.

Fortenberry said she’s blessed to be a part of the Wolfpack softball team, and she thinks her new sisterhood will be a threat in 2018.

“We don’t have many big, big hitters, but we can play a lot of small ball, a lot of smart ball, and we’ve got a lot of talent,” she said.

Fortenberry’s little sister, Gin, is a freshman back at Lawrence County, where expectations are high.

“If this spring is anything like the slow-pitch season they had, I think Lawrence County is going to have a great season,” she said. “They have the potential to go very far.”

Smith agreed with her teammate’s assessment of the Lady Wolves.

“We have good pitchers and a little bit of everything — speed, movement. We have it all,” she said. “Softball at Co-Lin is a lot different than high school. It’s like a job for us, it’s serious, but I love it.”

As far the Lady Hornets of Loyd Star, Smith said the team was young but capable.

“I think it will turn out well for them. They will surprise everybody,” she said.

Co-Lin softball coach Allen Kent said both Fortenberry and Smith will play important roles for the Lady Wolves this spring.

“Makenzie will see a good bit of action in the circle. She’s got a lot of movement in her pitches, and she swung the bat for us really well last fall,” he said. “Callie really bought into a couple of changes we made to her swing and had a good fall for us. She has a way of putting the ball in play for us and making things happen.”