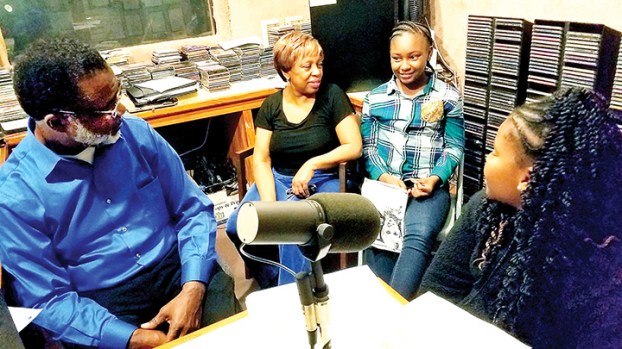 Photo by Donna Campbell/Students from the Boys & Girls Club of Lincoln County can be heard at 4:30 p.m. each weekday for the next two weeks on WCHJ. Pictured are, from left: station owner Charles Tillman, Boys & Club director Melanie Lewis, Asia Hughes and Harmony Allen.

Students take their message to the airwaves

Asia Hughes admires Rosa Parks, a woman who refused to give up her seat to a white man on a Montgomery, Alabama, bus in 1955.

The fourth-grader at Brookhaven Elementary School started the two-week Black History Month program at a local radio station Monday, reading aloud her essay on Parks. Each year, students in the after-school program at the Boys & Girls Club of Lincoln County study black Americans who have made impacts on society and take turns sharing what they learn in the studio of WCHJ in Brookhaven. The 30-minute segments can be heard at 4:30 p.m. Monday through Friday for the next two weeks on Victory 1470 AM and Praise 97.5 FM.

Students from the Boys & Girls Club have been participating in this partnership with the radio station for 21 years, said  Rev. Charles Tillman, the owner and operator of the gospel stations.

This was Hughes’ second visit to the station to talk about famous black historical figures. It was the third visit for Harmony Allen, a fifth-grader from Lipsey Middle School, who researched former first lady Michelle Obama for her essay.

Allen respects Obama’s accomplishments, but if she had her choice, she’d rather be president than first lady.

Boys & Girls Club Director Melanie Lewis takes a pair of students to the station each afternoon for the two weeks, while the others in the after-school program listen to the broadcast at the clubhouse. She said the project gets them talking about famous black Americans.

“It basically exposes the children to famous black Americans they may not know of so they’re learning from this experience, and the exposure of going to a real radio station,” she said.

Some choose the person they want to research, while others pick from info sheets already printed with information.

Tillman quizzes the students on-air to see what they learned from their research.

Lewis said the project encourages the students to learn about black history and it also gives them valuable experience in public speaking.

“Some just appreciate that they’re on the radio,” she said.