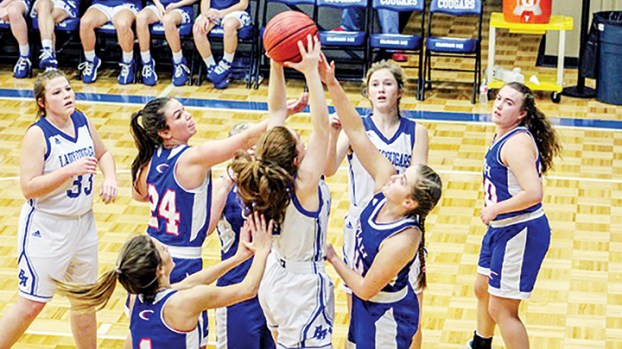 Photo by Emily Phillips/Brookhaven Academy Lady Cougars faced off against Copiah Academy, resulting in a 54-48 victory for BA.

Brookhaven had a narrow 11-9 lead against Copiah in the first quarter and furthered their lead in the second, heading into halftime 27-21. The girls in white maintained a four-point lead in the third quarter and squeezed out a win against the Lady Colonels 54-48.

Case and Warren led the Lady Cougars in defensive play. Case had nine rebounds while Warren had four steals. Jordan, Watson, Warren and junior Macy Grace Smith had eight, seven, three and two rebounds, respectively. Freshman Makayla Martin and eighth-grader Emily Claire Felder had one rebound apiece. Watson and Case both had two steals, and Smith and Martin each had one steal. The Lady Cougars were sent to the line for a chance at 22 extra points.

With Copiah Academy being close in proximity, there is a bit of a rivalry between the two teams, but Brookhaven came in with their eyes set on a victory. This matchup was a bit more physical than usual, which led to some obvious frustration and many foul calls that did not always play in the Lady Cougars’ favor. Watson picked up five fouls early in the fourth quarter, which made for an unfortunate last quarter without one of BA’s more dominant and physical post players.

“Emotions were running high before the game started,” said BA coach Jason Case. “When there are tears and emotions like that, it isn’t hard to get pumped up for a game, especially against a rival like Copiah.”

Brookhaven Academy will enter the District 3-AA Tournament as the No. 1 seed. The Lady Cougars will play the winner between Sylva Bay Academy and Prentiss Christian Thursday at Sylva Bay. Tip off will be at 4 p.m.