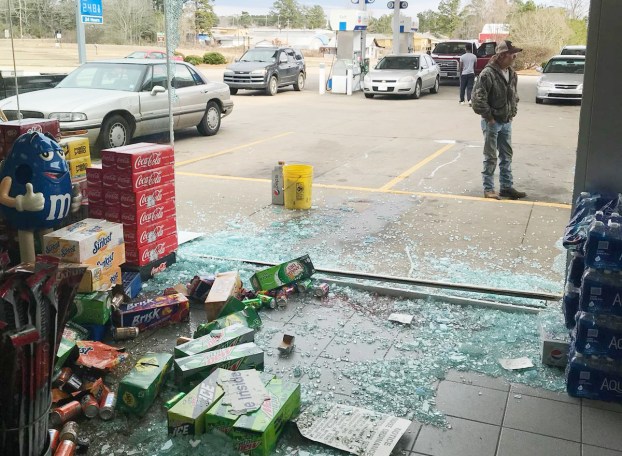 Submitted photo/R.B. Bowman of Brookhaven crashed his car through the glass window of the Duncan Chevron on Hwy. 27 Saturday.

Brookhaven man runs vehicle in, out of store

A Brookhaven man who plowed his car into a convenience store in Monticello over the weekend, backed it out and drove away before he was stopped by a game warden.

Monticello Police Chief David Stanley said R.B. Bowman, 66, of 501 Brookman Drive, drove through the plate glass window in front of the store about 12:30 p.m. Saturday, crashing into a large stack of soda cases and almost mowing down a blue M&M candy display.

“He actually drove his car into the building,” Stanley said. “The store was full but  no one was in that particular area that he ran through.”

Stanley said Bowman got out and looked around then got back in, backed out of the scattered debris and glass then drove away.

An officer with Mississippi Wildlife, Fisheries and Parks was at the station and took off after him. He stopped Bowman nearby and held him there until a Monticello police officer could arrive.

Bowman was charged with DUI first offense as well as leaving the scene of an accident, no proof of liability insurance, expired drivers license, resisting arrest and disorderly conduct. A Silver Creek man who ran from Monticello police officers over the weekend turned out to be a fugitive wanted... read more