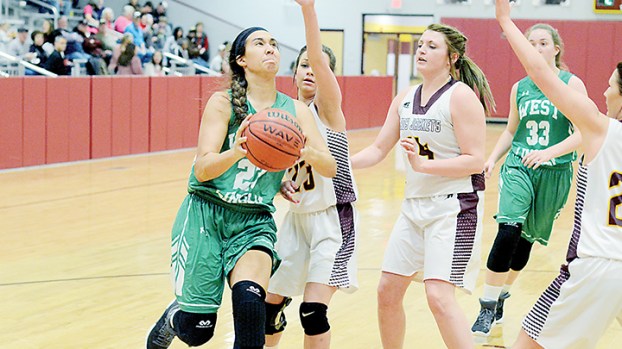 Photo by Dave Linton/West Lincoln junior Megan Gerald goes up for a shot in Friday night’s away victory at Enterprise.

A close contest unraveled in a third quarter dominated by West Lincoln. The Lady Bears broke out of a close contest and outscored Enterprise 22-7 in the third period, taking control of the game and riding out the fourth quarter.

“The first half was terrible, but we had a great third quarter,” Lady Bears coach Brooks Smith said. “We did enough in the third quarter to push us ahead and sustain a margin of victory.”

Although the she-bears scored the first basket of the game, it was Enterprise’s Nations twins — Carlee and Jana — that kept the Lady Jackets in front throughout the first period. Enterprise led 7-6 moving into the second period.

Both teams missed their marks on half their shots as the second quarter went along. The Lady Bears hit some offensive spurs, but the Lady Jackets managed to sustain enough offense take a slim, 15-14 lead into halftime.

The Lady Bears came out of the locker room looking like a totally different team than the one that played the first half. Causing turnovers, the she-bears took their first lead of the game and started to separate themselves from the Lady Jackets. Enterprise made some needed baskets and slowly climbed their way back into the game, but the Lady Bears commanded a 36-22 lead going into the final quarter — a huge margin in a game where points were had to come by.

Despite the Lady Jackets continuing to make the baskets to stay in the game, West Lincoln’s offense as able to stay ahead of them. The Lady Bears went on to win by a final score of 44-32.

The Daily Leader sought to interview the top-performing players from both teams, but Enterprise coach Shane Adams was meeting with his players in the locker room. West Lincoln coach Brooks Smith has prohibited his team from speaking to the press.

Enterprise had no answer for West Lincoln’s offense Friday night, as they fell by a score of 60-35. From the... read more