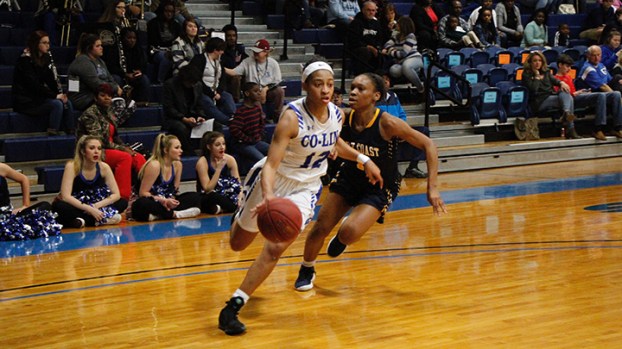 Photo by Co-Lin Sports Information/Lady Wolves sophomore Alexu Holt attacks toward the lane Monday in her team’s 78-63 victory over Mississippi Gulf Coast. The Co-Lin women are 15-3 on the year.

The Copiah-Lincoln Community College Lady Wolves moved to 15-3 on the year and 6-3 in the MACJC South Division with a 78-63 win over Mississippi Gulf Coast on Monday night.

The Lady Wolves had a slow start, but scored 20 or more points in each of the final three quarters.

“Every win we can get in the south is big. You have to be ready to win every game,” said head coach Gwyn Young. “We started slow, especially with some early turnovers, but we finally started executing. There is stuff we still need to work on, but Alexus Holt and Brittany Rose had some good offensive games for us.”

The Lady Wolves scored just 12 points in the opening quarter, as offensive troubles plagued Co-Lin. On the defensive end the Lady Wolves played solidly and capitalized on missed Gulf Coast shots. After one quarter of play Co-Lin led 12-8.

In the second quarter the Lady Wolves began minimizing turnovers and running a successful offense. A 14-3 run led by Holt and Rose gave Co-Lin a 10-point, 29-19 lead with 2:18 remaining until halftime.

Both teams traded baskets for the third quarter and Co-Lin took a 12-point, 55-43, lead into the fourth.

In the final period, the Lady Wolves poured in baskets and ran away with the contest. Co-Lin opened the period with a 12-1 run that stretched the Lady Wolves’ lead to 66-43. The Lady Wolves’ offense continued to click for the final seven minutes, as Co-Lin secured the 78-63 win.

The Lady Wolves are back in Wesson on Thursday at 6 p.m. as Co-Lin hosts Hinds Community College.