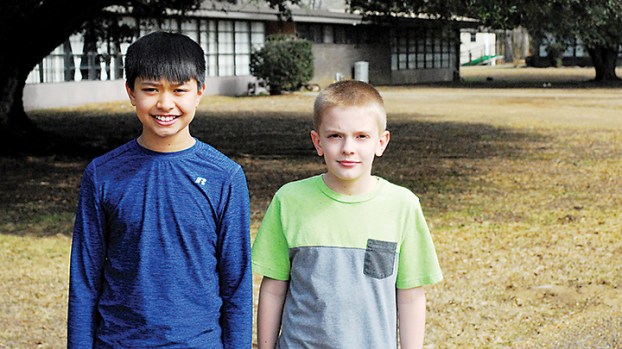 “The fact that two of our kids placed is a testament to the language arts education our students are receiving here at Lipsey, and it also demonstrates how important parent participation is to a child’s education,” Lipsey Principal Rita Robinson said.

This year’s grand champion is a battle-tested spelling bee veteran. When Ogletree was in fourth grade, he placed second in the district, and, last year, he came in third.

“It feels really good to finally win,” he said.

He was declared the victor after successfully spelling the word “mizzle” — defined as a light rain or drizzle.

The contest was hard won, and competition ran long — totaling 25 rounds, or roughly 45 minutes. Despite the lengthy struggle, Ogletree said he was relaxed from start to finish.

“I’ve never really been nervous during a spelling bee. I just try to stay calm, because I seem to do better when I’m calm,” he said.

Ten-year-old Dykes, on the other hand, rode a wave of near-electric excitement to the finish line. His parents — Joe and Jessica Dykes — helped him study for the bee, and, even though he was well prepared, the thrill of competition kept his pulse racing.

“I just started sweating and got nervous,” he said.

Ogletree lives by the old adage “practice makes perfect,” and he concentrated on sharpening his vocabulary in the days leading up to the championship. His parents — Bill and Jehan Ogletree — helped him prepare, and he gives them credit for his victory.

“To make studying more fun for me, they called out the words, and I would spell them on the table with Scrabble tiles,” he said.

Ogletree is a relatively tranquil scholar, and he rarely loses his cool. Each time he competes in a spelling bee, he focuses on having fun rather than winning.

“It’s really about doing your best,” he said.

He considers spelling a “mental sport,” and he often enjoys an adrenaline rush while competing.

“I don’t know how to explain it. It gets your heart racing,” he said.

Ogletree will soon participate in the state spelling bee, and, if he wins, he will qualify for the Scripps National Spelling Bee in Washington, D.C. But, for now, he’s content with his local victory.

He was serene the moment he was declared district champion. Ogletree said he took a deep breath, looked out over the audience and smiled.

“I saw my mom clap, and she was smiling. My dad gave me a thumbs up, and my grandma was so scared during the whole thing that she just closed her eyes,” he said, laughing.

Brookhaven man runs vehicle in, out of store

A Brookhaven man who plowed his car into a convenience store in Monticello over the weekend, backed it out and... read more