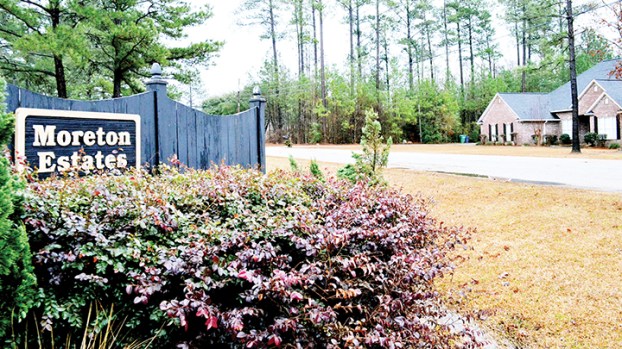 Photo by Adam Northam/Moreton Estates is one of several annexed areas in Brookhaven that will soon see construction of water and sewer lines.

Promises made by Brookhaven public officials in the mid-2000s for water and sewer in several annexed neighborhoods may soon become more than plans on paper.

The Brookhaven Board of Aldermen this week voted to finalize two 20-year loans — which total $8.5 million — to begin the Annexation Improvements Project. Engineers expect construction to begin in March or April.

• Water and sewer into Deer Run

• Water and sewer into Moreton Estates

• Water only along Natchez Drive from Zetus Road to Hwy 84

• Sewer only into Lakewood Village

• Sewer along Hwy. 51 North from Heritage Family Church to New Sight Drive and into Pandora Subdivision

• Water only along Union Street Extension, from Industrial Park Road to I-55

In 2014, McKenzie’s project status report showed that the plans were expected to cost a maximum of $8 million, which was approved by the board at that time. Plans were then submitted to MDEQ and MDH.

McKenzie said he brought it back to the board Tuesday night because the project was expected to cost a bit more than the original estimate. Besides paying for extension of water and sewer lines into the neighborhoods, the project also includes renovations and repairs of the Brookhaven Waste Water Treatment Plant, he said.

Greenbriar was the lowest bidder for the water and sewer expansion at $6,390,000 million. The treatment plant renovations are another $1.1 million, and the rest is engineering and other associated costs, McKenzie said.

“We started working on the project four years ago,” he said. “We started talking to the city board for two years prior to that. It’s been in the works for a long time.”

But the idea of the project began as far back as 2005 — under former Mayor Bob Massengill — when Brookhaven began the process of annexing parts of Lincoln County. An article published in The Daily Leader in 2014 said when the annexation was completed in 2007, officials said the annexation was necessary to keep the city fiscally viable. The annexation increased the city’s population by about 3,000 people and would be more appealing to new industry and business while allowing room for further expansion, officials said at the time.

Those residents will soon be able to get rid of septic tanks and wells.

“We’re going in and installing water and sewer lines where they don’t presently exist,” he said.

Once homes are connected, residents will start receiving bills from the city for those fee-based services, McKenzie said.

Old bus stop in Brookhaven to open as antique store

Tim Green’s passion is finding unique antiques to buy and sell, while his bread and butter is restoring those owned... read more