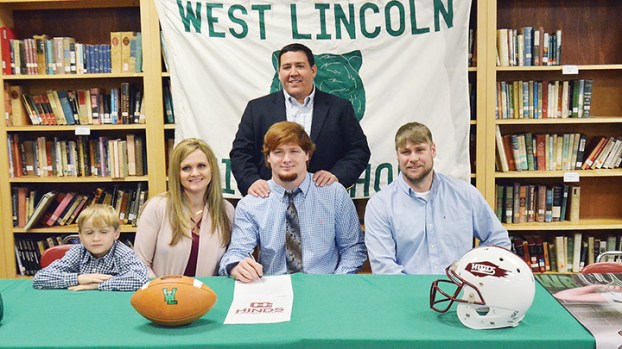 Chase Owen used to be tiny.

The West Lincoln senior was born too soon, at 30 weeks, and spent his first month on earth in a plastic box in neonatal intensive care. He weighed four pounds, three ounces. He grew up a small, skinny child. He had asthma.

His mother, Kristy Abrams, was afraid he would have disabilities, grow up small, miss out on a normal boyhood. None of that happened.

“He’s played football since he was 4 years old, always been an A student and it has never slowed him down,” she said.

On Wednesday, she couldn’t tell the whole story because she didn’t want to cry. She wanted to look nice for the photo with Owen — 6-foot-3, 215 pounds — signing a football scholarship to attend Hinds Community College.

He did, and became the first West Lincoln football athlete to ever sign a college scholarship.

“I can’t even explain how it feels. I hope the younger guys will continue to put in the hard work, because I know West Lincoln has the athletes to follow in my footsteps,” Owen said.

Owen certainly set the standard for future Bears. In 2017, he played all over the field as the go-to athlete. He carried 102 times for 668 yards and 11 touchdowns, caught 34 passes for 628 yards and five touchdowns, and passed for 415 yards and six scores.

On defense, Owen got in on 88 tackles, grabbed three interceptions, forced three fumbles and recovered two.

At Hinds, he’ll stick to offense and play in the tight end/H-back position.

“I will be comfortable with that. Whatever the coaches think will fit me best, I will give it my all,” Owen said. “The coaches at Hinds have been very straight-forward with me, told me what the plan is going to be.”

Hinds head coach Larry Williams said Owen would be a big asset to the Eagles’ program.

“Chase Owen is one guy we couldn’t afford to lose when we put together this upcoming class,” he said. “We were looking for a big ‘ole dual-threat tight end that can block and catch the ball. We’re going back to more of a tight end set, and Chase can do a lot of things for us on offense.”

West Lincoln coach B.J. Smithhart said the Bears football team has been blessed to have Owen on the roster, and Owen’s signing will be a continued blessing for seasons to come.

“To sign your first football scholarship does a lot for your program. Someone from West Lincoln can play at the next level if they work hard enough,” he said. “Chase has shown it can happen. He’s been exceptional on the football field and in school.”

After watching Owen grow up — and grow big — Abrams is not surprised at her son’s success.

“I knew he was destined for great things. He was a fighter,” she said. “I’m so very proud of him.”

They’ve been their brothers’ keepers for years. But next football season, the brothers will line up against each other. Brookhaven... read more