She appeared in a Kenny Chesney video with her husband, Kris, and her sister.

They’re somewhere on the front row of the concert in the “Flora-Bama” video released in 2014. She’s the young woman in a black bikini, waving from atop her husband’s shoulders at the 3:55 mark. You can see them again at 4:22.

“It was the first concert he did in several years and we were lucky and got in,” she said.

“We ended up on the front row, so we were extremely lucky,” she said. “He ended up performing right in front of us most of the time.”

Luck has been on Xifos’ side in several situations.

She’s lucky she likes the New Orleans Saints, too.

She and a friend were on the Saints’ Facebook page in a photo from one of their games in 2010.

Kris Xifos, a huge Saints fan, was flipping through the photos on Facebook and spotted the brunette who would eventually become his wife.

“He was looking through the photos and came across ours and messaged me,” she said.

The pair have been married five years and have a 1-year-old, Aaryn.

She loves the outdoors, unless there’s a frog nearby. She’s deathly afraid of the green amphibians.

She’s a competitive runner and enjoys spending her summers at the lake. She’s recently taken up photography so she’s looking forward to some lakeside photo shoots soon.

She attends Fair River Baptist Church with her family, and said she tries to stay upbeat and encourages others to do the same.

“I try my hardest to always keep a positive, uplifting spirit,” she said. “I really do believe that people need a little bit more happy in their lives.”
Another interesting tidbit — her name gets mispronounced often. It sounds like Hank William’s Jr.’ nickname, Bocephus except with an “ex” instead of “Bo.” Her husband said his grandfather brought the name over from Greece and pronounced it like “Ex—cephus.” 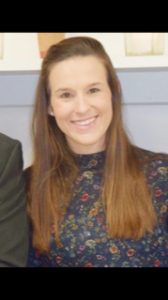