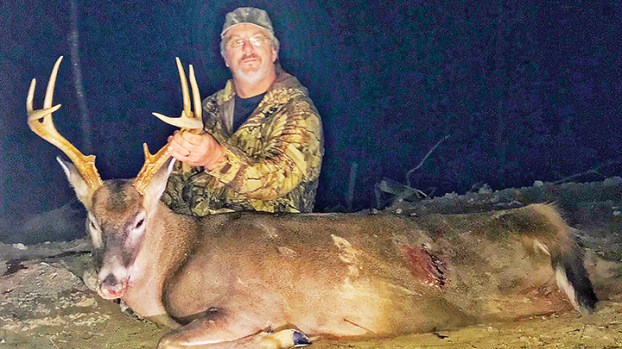 I shot the buck on the afternoon of Jan. 15. I had taken my primary hunting rifle to a gunsmith that morning to put a target crown on the barrel and was borrowing my dad’s BAR 7 Mag.

That afternoon I arrived at where I was hunting only to realize I had too many clothes on and I had a fairly long walk in. I shed some outer clothing and was standing at the front of my truck finishing a bottle of water before the walk in when I looked up and saw a big dark bodied buck walking around my entrance gate.

The buck was across a hollow and about 125 yards away, and he had no idea I was around. I quickly raised up the rifle and found a little small hole he was going to cross. When he hit the opening, I fired dropping him in his tracks. This was about 3:30 in the afternoon.

I walked over to him and realized with his size, I wouldn’t be able to get him in the back of my truck by myself. Fortunately there was another camp member that was close by and he helped me load him up.

When we got back to the camp, we weighed him at 237 pounds. Once we hung him up, we realized that the buck was a foot longer than every other buck. He was also completely run down from the rut and was very skinny.

I think a few weeks earlier during the pre-rut this buck would have easily been 270 plus pounds. The buck also was aged at only  4 1/2 years old.

I normally run several cameras on my properties, but this was a buck I had zero history with. I had never seen this buck before and I didn’t have a single picture of him.

The crazy thing is 5 minutes earlier and I don’t see the deer walking around my gate and 5 minutes later I don’t see him either. Sometimes you’re just lucky and its just a matter of being in the right place and the right exact moment.

Wednesday was national signing day, when all the football-playing guys had their fun. On Thursday, Brookhaven Academy senior Kailyn Jordan... read more