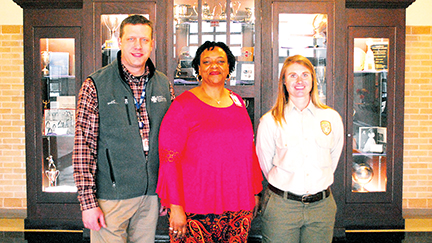 With graduation looming in the distance, the Brookhaven Technical Center treated its students Tuesday to a “Nontraditional Career Day” program at the Brookhaven High School auditorium.

Student Services Coordinator Sylvia L. Balentine organized the assembly as part of a monthlong series of activities designed to encourage the center’s students to dive into the pool of professional possibilities.

“Sometimes, our students get stuck on finishing high school, and you’d be surprised at how many of them don’t think about their future beyond graduation. We just want to let them know that they can start preparing for a career while they’re still in school,” she said.

The unofficial theme of Tuesday’s assembly was “looking beyond gender stereotypes,” and both speakers stressed the importance of following your passion, regardless of its historical connotations.

Public information and outreach officer Meacham Harlow, an Urban Forestry Partnership coordinator with the Mississippi Forestry Commission, spoke first. As part of her speech, she told the crowd about the long and surprising process through which she became a forester.

“I didn’t know what I wanted to do right out of high school, and I just wanted to encourage these students to follow their interests,” she said.

Harlow is one of only a few women currently working for the Forestry Commission, and, consequently, she has faced more than her fair share of workplace adversity. But, despite an arduous uphill climb, she has achieved professional success in a relatively short time.

“Being a minority in a male-dominated field has helped me, but it has also been a challenge. That being said, it’s nothing to be afraid of,” she said.

Registered nurse Joe Farr followed Harlow’s speech, and he discussed the importance of choosing a job with which you are wholly compatible. He currently works at King’s Daughters Medical Center, but his path to career fulfillment was long and complicated.

“It’s good for the younger generation to hear about the opportunities out there that aren’t quite so obvious,” he said.

He explained the difference between temporary financial happiness and long-term job satisfaction. He also encouraged the students to push themselves beyond their current expectations and pursue careers that pique their curiosity.

Elijah Smith, 17, attended the program, and he found Harlow and Farr’s advice rousing. He plans to attend Mississippi State University after high school and hopes to build a law career.

“I feel like they really motivated us. I believe you can succeed at any career if you set your mind to it,” he said.

One of these days, Maxine Allen plans to take all the information she’s collected in the last eight years about... read more