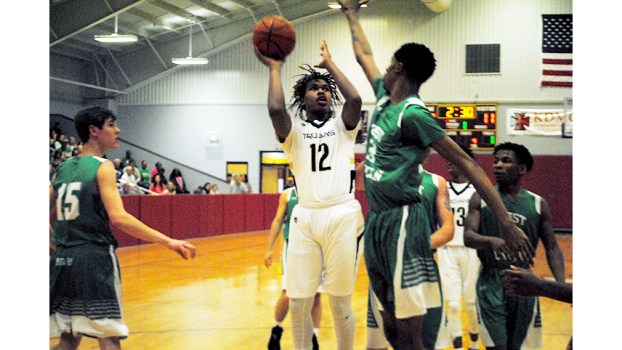 The Amite County Trojans advanced to the Region 7-2A championship Friday night after squeezing out a 52-50 victory over West Lincoln in the final seconds of the game Thursday.

Two points has been the magical number for the Trojans every time they have faced the Bears. Playing from behind throughout the whole game, West Lincoln refused to go down without a fight. The Bears made every possible move in the fourth to pull out the comeback win, but their do-or-die shot at the buzzer bounced out.

“I was proud of the effort in the fourth quarter,” West Lincoln coach Brooks Smith said. “We missed nine free throws and free throws matter. I hate it that we didn’t pull it out. All three times we have faced off, they have been close games.”

Amite County’s offense scored quickly and often to start the game. Creating turnovers, the Trojans kept the Bears in check. With two minutes left in the first, West Lincoln had battled their way to a 16-13 deficit.

The Trojan’s offense continued building onto their lead, as their offense ran wild and their defense held the Bears to just eight points the whole second quarter. Amite County led 32-21 at halftime.

The Bears slowly climbed into the game in the third, as they shrunk Amite County’s lead to 37-30 with two minutes left. The Trojans led 39-34 after three quarters.

Amite County’s offense started firing in the fourth, trying to prevent the Bears from getting back into the game. West Lincoln continued to claw their way toward the Trojans, and with two minutes remaining it was a one-possession game, with the Trojans up 48-46.

With just over a minute left, West Lincoln managed to tie the game at 50-all. Amite County was able to break the tie with time clicking away. West Lincoln couldn’t get their shot to go in as the buzzer sounded. Amite County held on to win 52-50.

Amite County was set to take on Bogue Chitto for the Region 7-2A championship Friday.

The Brookhaven Academy Cougars came into the AA South State Tournament as the top ranked team in the state and... read more