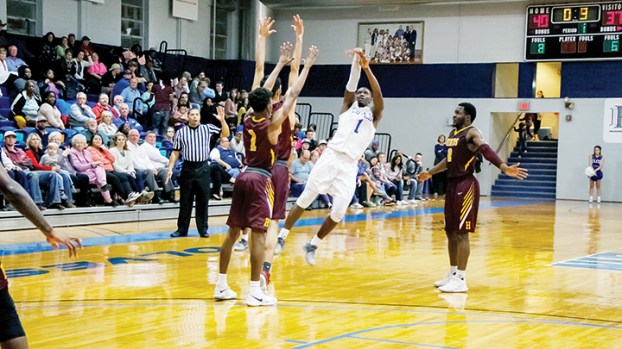 Mullen Gymnasium was rocking Thursday night as the Copiah-Lincoln Community College Wolves defeated the Southwest Bears 73-71 to remain in first place in the MACJC South Division.

“I wish I’d done better getting us in a better offense position, but we ended up getting some good ones in the corner. We really stepped up on the defensive end and that made the difference,” said Co-Lin head coach Kenny Bizot. “We showed a lot of toughness and made some plays when we needed to. I’m just happy for our guys and happy for our program.”

The Bears controlled the game early as Southwest leapt out to a 6-0 lead in the first three minutes of play. The Wolves tied the game at eight-all a few possessions later, as Jonathan Floyd and Miles Daniels rattled home some three-pointers, but the Bears began to pull away over the next several minutes.

Several free throws and back-to-back threes from Southwest’s Antonio Cowart, Jr., stretched the Bears’ lead to 14, the most of the game, with just 6:15 remaining in the half. However, the 37-26 lead was short lived, as the Wolves began knocking down shots and getting rebounds on the other end of the floor.

The 12-1 Co-Lin run led by Floyd, Mike McWilliams and Damarius Brooks brought the Wolves within three, 38-35, with just 3:39 left in the half. Co-Lin was unable to take the lead before the half and the Bears took a four-point, 42-38, lead into intermission.

The second half was all Co-Lin as the Wolves took their first lead of the game, 45-44, on a Brooks layup with 17:10. Co-Lin would not trail again for the remainder of the contest.

Lock-down defense and several successful offensive sets allowed the Wolves to grow the lead to 13, 68-55, with 7:09 left on the clock. The Bears slowly began chipping back into the game, and brought the game with three with a 12-3 run late in the contest. The Wolves made several key stops in the final minutes to secure the73-71 win.

Youry White scored 10 on the night and led Co-Lin on the glass with nine rebounds. Miles Daniels rounded out Co-Lin’s top scorers with nine points on the night. Floyd also led the Wolves with four steals in the contest.

The Amite County Trojans advance to the Region 7-2A championship Friday night after squeezing out a 52-50 victory over West... read more