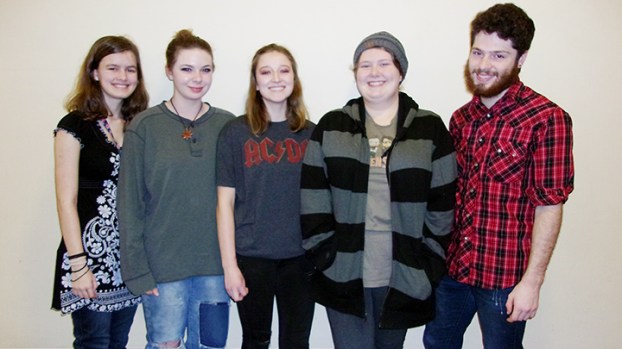 Photo submitted/Several students at the Mississippi School of the Arts recently received awards in the Regional Scholastic Creative Writing competition. Pictured are, from left: Shelly Castilaw, Katherine Westbrook, Charlotte Drane and Katelyn Bergeron, all of Wesson, and Christopher Aaron of Bogue Chitto. Not pictured is Bradley Ducote of Bogue Chitto.

Correction: The story has been updated to show an increased number of awards for some of the students listed.

Shelly Castilaw knew she and her classmates were good writers, but now they have the awards to prove it.

Several literary arts students from the Mississippi School of the Arts recently received awards in the prestigious Regional Scholastic Creative Writing Competition hosted by The Eudora Welty House, in conjunction with the Eudora Welty Foundation.

MSA students received one of the five American Voices nomination/Best in Show awards and four of the 10 Senior Portfolio awards.

“One hundred percent of the senior class of the 2018 literary department — a small group of 10 students — were honored for their writing,” said MSA spokeswoman Jennifer Jackson. “In addition to the seniors, seven juniors and a non-literary major, a dancer, received awards as well.”

Castilaw, of Wesson, is the daughter of Mark and Katrina Castilaw. Her mother is assistant director of the Lincoln-Lawrence-Franklin Regional Library System so the 17-year-old grew up around books.

She was schooled at home until the sixth grade, and said she spent a lot of time at the library reading. She studied at the Wesson Attendance Center before she applied and was accepted to the literary program at MSA for her junior and senior years.

She started creating stories her freshman year at Wesson, but said she learned how to write when she made the move to MSA.

Castilaw received an American Voices Nomination/Best in Show, a Gold Key for her senior portfolio, two additional Gold Keys, one Silver Key and an honorable mention. Receiving the recognition has been a boost to her confidence as a writer.

“I have so much more confidence and I know I’m a good writer and I have evidence of it now,” she said.

She credits her department’s instructor, Clinnesha Sibley, for encouraging her students and sharing her knowledge with them.

“She’s a published playwright with a lot of experience. She knows all of the ins and outs of writing,” she said.

Other local students who won include:

• Katelyn Bergeron, a senior from Wesson,received a Silver Key for her senior portfolio and three additional Silver Keys.

• Charlotte Drane, a junior from Wesson, received an honorable mention.

The Scholastic Art & Writing Awards are presented by the Alliance for Young Artists & Writers is nonprofit organization whose mission is to identify students with exceptional artistic and literary talent and present their remarkable work to the world, Jackson said. The Eudora Welty Foundation is the state’s affiliate for the writing awards, working in partnership with the Eudora Welty House, a museum of the Mississippi Department of Archives and History. Through the awards, students receive opportunities for recognition, exhibition, publication and scholarships.

Entries receiving American Voices nominations and Gold Key awards, which are the highest level of achievement, will be sent to New York City where they will compete in the national competition among 80 other regions.

In an effort to raise funds for veterans, Socks for Heroes has scheduled a Hop Around the Lake 5K walk/run... read more