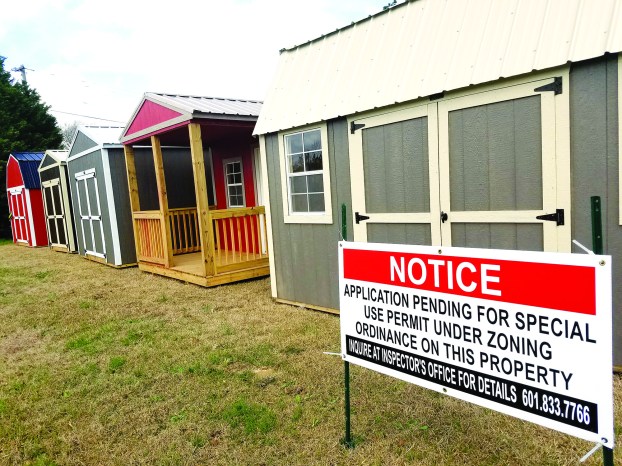 Photo by Donna Campbell/Premier Portable Buildings received permission to use one of its buildings as an office by a 4-2 vote by the Brookhaven Board of Aldermen Tuesday.

A business selling portable buildings at the corner of Industrial Road and Union Street Extension was criticized Tuesday night by a Brookhaven alderman, who called it an eyesore.

Premier Portable Buildings received approval by the Brookhaven Board of Adjustments Thursday to use one of its buildings as an office on the lot, which is between Union Street Extension and North Haven Apartments.

Building Inspector David Fearn brought the decision to the Brookhaven Board of Aldermen Tuesday to finalize.

He said the Board of Adjustments approved the variance to the Commercial-3 zone as long as Premier meets requirements such as putting the building on blocks and tying it down.

Alderwoman-at-Large Karen Sullivan, who made the motion, as well as Ward 1 Alderman Dorsey Cameron, Ward 2 Alderman Shannon Moore and Ward 5 Alderman Fletcher Grice voted for it. Ward 3 Alderwoman Mary Wilson, though at the table, abstained because she said she didn’t know enough about it after the discussion to cast a vote.

During the discussion before the vote, Harrigill said she didn’t mind the office being there, but didn’t want the rest of the portable buildings to be there at a busy intersection.

She said the business is using the variance for more than what they’re asking for, but Fearn told her that because the lot is in a Commercial-3 zone, they can sell anything there as a business. The variance gives them permission to use a building as an office.

The business has a permit to operate on file with the City Clerk’s office.

Harrigill asked Fearn about setback requirements and he explained there were none, although they must be at least 10 feet away from the apartment property.

He said the buildings were encroaching on the city’s right-of-way and he had the owner move them back five more feet.

There are about 12 portable buildings on the lot. About half line the length of the lot facing Union Street Extension.

Fearn said Wednesday he plans to ask them to move back a little further from the right-of-way.

Harrigill told The Daily Leader Wednesday she didn’t like the location of the business, noting its a main entrance to the Industrial Park. It’s also in her ward.

“It’s the absolute worse place ever,” she said. “They can do it, but they just threw those things out there. It’s the worst looking eyesore.”

She just noticed the buildings about a week ago.

“We can’t prohibit them from being there, but Jason (Snider) and I think it looks awful.”

Harrigill said she doesn’t think that type of business should locate on that corner.

“It’s the most random place to put anything,” she said. “There’s no sign. It doesn’t look like a legitimate building.”

Two signs on the property advertise Premier Portable Buildings and its “No money down, no credit check” rent-to-own payment plan, although no contact information is listed. The buildings are neatly arranged and look new and neatly painted. The grass in the lot and around the buildings is cut short.

Harrigill complained that it was on the main thoroughfare to many of the industries in Brookhaven.

“They’ll all see all those nasty looking buildings,” she said. “I don’t like the whole idea.”

She said it’s on a grassy knoll, and compared it to the size of someone’s yard.

“Why someone would want to have a business there is beyond me,” she told the newspaper. “We’re not a fan of where they set up camp. It’s in a prominent spot. It’s not attractive. You just walk away scratching your head wondering why they picked that spot. It doesn’t look like a business.”