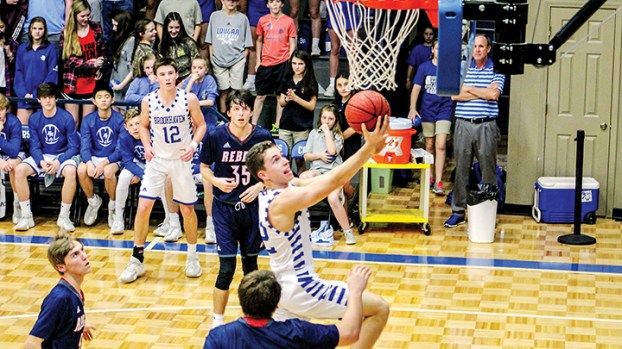 Photo by Emily Phillips/Brookhaven Academy senior Ethan Nations goes up to the glass for a layup in Wednesday night’s 62-32 victory over Tr-County. The Cougars will face St. Joseph in the second round of the MAIS state tournament tonight.

The Cougars took a commanding lead over Tri-County, 21-8, in the first quarter and maintained a 20-point lead heading into halftime. BA added 13 points to their total in the third quarter, only allowing Tri-County five points. In the end, the Cougars outscored the Rebels by nearly double.

“We came out much harder for tonight’s game because this was a go-home game,” said BA senior Tate Felder. “Going forward, we want to remain humble and not beat ourselves in any later parts of the tournament.”

At first glance, the height advantage seemed to sway in Brookhaven’s favor. Both teams, for early parts of the first quarter, seemed to be evenly matched, as far as sheer basketball knowledge and athletic ability are concerned. The one thing Brookhaven seemed to have the Rebels could not match was their chemistry and court vision.

This became evident as the Cougars held the Rebels to just eight points for the later part of the first quarter. The Cougars were able to go on a scoring tangent, racking up 21 points mostly made up of solid, inside block and post work. After this momentum was achieved, it gave control of the game to the Cougars and they took that control all the way to a first round win.

“During a tournament, we are sharper and ready for the teams that we are playing,” said senior Luke Jackson. “Our minds are set on winning state.”

Brown led the Cougars in defensive play with nine rebounds and one steal. Flowers and Jackson had seven and four rebounds, respectively. Nations and Thurman both had three rebounds, and Felder and sophomore Britton Nelson each had one rebound. Jackson, Flowers, and Felder each made one steal.

The Cougars were sent to the line for a chance at 16 extra points, making 13 of those shots for 81 percent.

“I wouldn’t say the approach to a play-off game is different than a regular season game — you just deal with the added pressure knowing that if you lose, you go home,” said BA coach Josh Watts. “If you calm the nerves and focus on your gameplay, the night will go how you want it.”

Brookhaven Academy will play St. Joseph in the semifinals of the Class AA Tournament in Brookhaven tonight at 7:15 p.m.