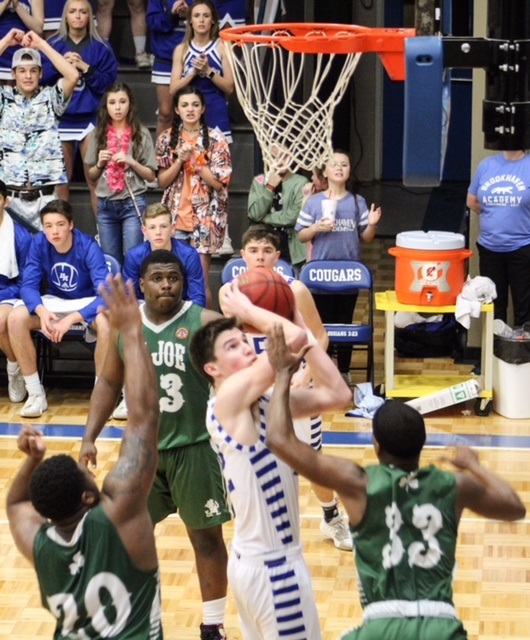 Brookhaven fell to St. Joseph 10-9 in the first quarter, but went into halftime one point ahead of the Fighting Irish. BA only added six points to their total in the third quarter and allowed St. Joseph only five. The Cougars couldn’t keep their lead and were tied with St. Joseph 36-36 at the end of regulation. The game went into double overtime, ending with two shots at the free throw line to send Brookhaven over the top.

“We did what we had to do to get the win,” said Junior Cade Brown. “The Good Lord definitely helped us out with that win.”

The atmosphere of the semi-final matchup was almost equivalent to that of an NBA final. The Brookhaven and St. Joe fans present in the John R. Gray Gymnasium witnessed one for the history books. It will most likely be the game to remember in the 2018 Class AA State Tournament.

The pressure began early in the first, with both teams proving they earned their standing in the semi-finals. Very few mistakes and solid effort, offensively and defensively, allowed for a fast-paced game and what seemed like a “blink and you might miss it” first quarter.

The back and forth scoring continued throughout the rest of the first half and well beyond regulation playing time. Once overtime began, it was clear both teams had only two things on their mind—take the lead and beat the clock. This mentality had both teams striving for inside penetration, quick layups, defensive zone strategy and patient ball progression. This was utilized and executed much better for the home team, as Brookhaven clinched a Hollywood-style victory at the end of double overtime.

“We had a game plan going into the game, and we knew what we had to do,” said Junior Dawson Flowers. “We came out, played defense, and did whatever it took to win.”

Senior Ethan Nations led BA with 18 points. Brown and Flowers followed closely behind with 15 points each. Senior Luke Jackson added one point to the final score. The Cougars were sent to the line for a chance at 16 extra points, sinking 13.

“That was a good team we beat, and we couldn’t have done anything else but what our coach said,” said Junior Tanner Thurman. “Honestly, we didn’t have anything to do with that; it was all God. Coming off the bench, I had to trust in the Lord and do what I had to do.”

“I don’t know exactly what’s going through my mind right now after seeing a game like that. I’m exhausted and the kids are exhausted, but they did a great job,” said coach Josh Watts. “We never let the game get away from us, and fundamentals were a big key tonight. The main reason we won tonight was the fact that we wanted to win more than the other team, period.”

Brookhaven Academy moves on to the final round of the MAIS Class AA Tournament in Brookhaven. The Cougars will play Marshall Academy SAturday for the state championship at 7:15 p.m.