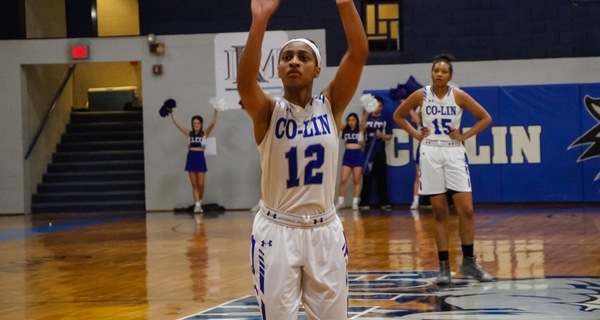 Photo by Co-Lin Athletics/Co-Lin sophomore Alexus Holt makes a free throw attempt during a home game earlier in the season. The Lady Wolves defeated the Lady Rangers 70-47 Tuesday night in the state tournament.

“We had some times where we missed some easy shots, but they struggled offensively and our defense was good…we had some hands on the ball and did a good job,” said Co-Lin head coach Gwyn Young. “I was proud of some of our shots, especially with some of our players off the bench, and we did a good job controlling the boards … Overall it was a really good win for us.”

The Lady Wolves leapt out to an 8-1 lead midway through the first quarter, after utilizing free throws until Northwest finally made their first basket on a fast break layup with 5:33 left in the quarter. Both teams struggled getting their offenses flowing for most of the period and the Lady Wolves led 12-10 entering the second.

Northwest tied the game at 14 apiece early in the second, but the Lady Wolves went on a 22-0 run led by T’Kyra Hicks, Alexus Holt, Kyeonia Harris, and Destiny Hemphill as Co-Lin rained in three-pointers. The huge swing in momentum left the Lady Wolves with a 36-14 lead with 1:46 remaining in the half. Co-Lin held the Lady Rangers to a five and a half minute scoring drought during the run, and held them to just seven points the entire quarter. The Lady Wolves took a 38-17 lead into the locker room.

The Lady Wolves continued to dominate both ends of the floor in the third quarter as Co-Lin forced several turnovers, capitalized on fast breaks, and controlled the boards. The impressive play gave Co-Lin a 58-30 lead going into the fourth quarter.

In the fourth, the Lady Wolves continued to grow their, which got to a game high 33 points with 8:24 remaining in the game. The Lady Wolves were outscored 17 to 12 in the final period, but the large lead built throughout the game allowed Co-Lin to coast to victory.

The difference in the contest was the Lady Wolves’ 26 points scored off turnovers.

Holt led the Lady Wolves with 19 points, while Karry Callahan added 12. Callahan also hauled in a team high 14 rebounds for a double-double. Harris scored 10 for the Lady Wolves to round out the double-digit scorers. Another notable stat was Holt’s six steals.

Wesson senior Dell Thigpen signs up to play football on a scholarship for Copiah-Lincoln Community College. Joining him were his... read more