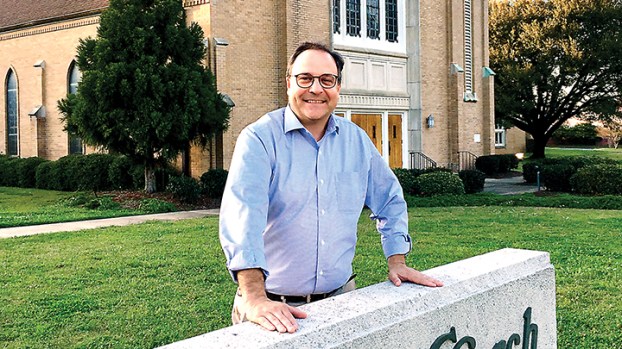 The mission: Bring people to faith — Brookhaven native finds his way back to the hometown church where he grew up

Sam McDonald circled the world to find his way back home again. And his home is in Brookhaven, as the new pastor of the same church he grew up in.

“I realize that I am one chapter in a long book that will someday tell the story of Faith Presbyterian Church. My hope is to honor Christ, accept my human limitations and help as best I can with God’s plan to redeem his world, one person at a time, in church, community and city,” he said.

McDonald’s family moved to Brookhaven in 1971 so that his father, Joe, could work at the Mississippi Forestry Commission and write for The Daily Leader. His mother, Louise, began working for Smith Insurance (now called Insurance Risk Managers) and stayed there for 30 years. His brother, Joey, died in a car accident in 1994. But he found an extended family with the friends that he played with as a boy.

“I learned about fighting and forgiveness on Johnny’s Field (a grassy, empty neighborhood lot). I learned about diversity and community eating oysters at Serio’s and I learned about loss and love in a kitchen on Morningside Drive,” he said.

McDonald’s mother still lives in Brookhaven and in the same house on Morningside Drive. So, he is returning home to more than just his church. Before entering seminary, his careers included journalism and teaching. He earned his bachelor’s degree from the University of Southern Mississippi in 1993 and a master’s in history two years later. He worked as the editor of the News Commercial in Collins and as a writer for a short time for The Daily Leader. Then one day, he received a phone call from Brookhaven High School to teach, a job application that he forgot he filled out.

“I stepped into the classroom overwhelmed and nervous…most of my students were being raised in very challenging settings,” he said. “But I learned there that my success in teaching was going to be about building relationships. That’s where I began to sense I had the kinds of gifts to explore the service of ministry.”

Working as a writer and as a teacher helped prepare McDonald for his position as pastor. He said his time with newspapers helped him learn to ask, listen and talk to people from a variety of backgrounds and experiences. It also taught him about his work being in the public eye and how to deal with comments and criticisms when they come along. Teaching in schools taught him that learning is more complex than the mere transference of information. McDonald said it requires time, shared experiences, empathy and patience.

In 2001, he and his wife, LeAnne, moved with their daughters to Malawi, Africa, where they served as teachers and missionaries. It was a move that surprised many family members and friends but it was something the couple agreed was their next step. At the time, his wife taught school at Brookhaven Elementary. The thought of leaving began as they sat listening during a mission conference at Faith Presbyterian.

“We were listening about the many needs for teachers, encouragers and ministers in Malawi. At one point in the conference, we looked at each other, smiled, and knew that we would soon be going to Africa despite the challenges of leaving home and living in a new culture,” he said.

In Africa, life was very different for the McDonalds and they felt completely out of place — learning a new culture, a new language, new teaching jobs and helping their daughters adjust. Amber Elizabeth was 3 when they first moved overseas and Molly Grace was 15 months. After a few years abroad, the family returned to Mississippi for four years. Then, with Africa calling once again, they left the comforts of the South and took a third daughter with them this time, 3-year-old Sarah Rose.

“Our girls loved growing up in Malawi. They didn’t have the amenities or countless options of breakfast cereal, or reliable electricity or internet, or places to go to that we do here. But each of them brought back a sense of the freedom and simplicity and the beauty of God’s world in the strangest of places,” he said.

About seven years ago, their final move back to the United States and a new church home in Corinth has been a memorable and cherished experience for the McDonalds. Now, Amber Elizabeth is a sophomore at Mississippi State, Molly Grace will graduate from Corinth High School this May and Sarah Rose will begin classes at Alexander Jr. High this fall.

In Brookhaven, McDonald plans to do what he can to connect people with their faith in God.

“When Faith announced this vacancy we began to pray, but only as a distant possibility. I simply did not think it would ever really be offered. Nor did I have any pressing desire to leave Corinth. We were in a great, comfortable place,” he said.

But as the conversations with Faith Presbyterian progressed, so did McDonald’s feeling that a new opportunity could not be discounted.

“Now Faith is calling us home,” he said. “Forgive the Presbyterian in me, but it all sounds incredibly providential.”

So, after an initial job as a journalist turned into a teaching career and then into a calling to preach, McDonald has made a full circle home.

“I hope to remain faithful to the task to share good news with both the lost and found, the self-righteous and self-destructive, the pharisee and the sinner and to patiently comfort the afflicted and afflict the comfortable,” he said.

Teacher questions answers on ‘Jeopardy!’ — Brookhaven woman will appear on an episode of the popular TV show June 25

This fifth-grade science teacher at Rod Paige Middle School will appear on “Jeopardy!” in June. Who is Kelly Griffin? If... read more