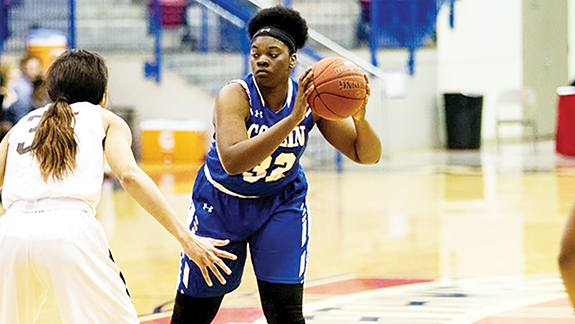 The Lady Wolves struggled finding the basket in the early minutes of the game as both teams played stellar defense, but Co-Lin began to stretch the lead late in the period. Karry Callahan had a put-back layup at the buzzer to give Co-Lin a seven-point, 19-12, lead going into the second.

In the second, the Lady Tigers began to chip away at the Lady Wolves lead, and tied the game for a second time at 21-all with 2:26 left in the half. Northeast took a one-point, 24-23, lead into the half.

The Lady Tigers grew their lead to four in the third quarter, but the Lady Wolves came roaring back. A quick 7-0 run from Alexus Holt and Keyonia Harris gave Co-Lin the lead again. Later in the quarter, a 10-2 Co-Lin run gave the Lady Wolves a nine-point, 45-36, lead. A late three from the Lady Tigers cut Co-Lin’s lead to six, going into the fourth quarter.

Co-Lin held their ground in the fourth and played very tough defense, and continued to score on the offensive end of the floor. Midway through the quarter Holt drained a quarter three, got a steal on the following Northeast possession, and completed an and-one layup. The six-point swing gave Co-Lin a huge amount of momentum heading into the final stretch of the game. The Lady Wolves never faltered in the final minutes and held on to an eight-point, 65-57, win.

Aundrea Adams led Northeast with 20 points, while Dayzsha Rogan poured in 10. Both Rogan and Adams led the Lady Tigers with seven rebounds.