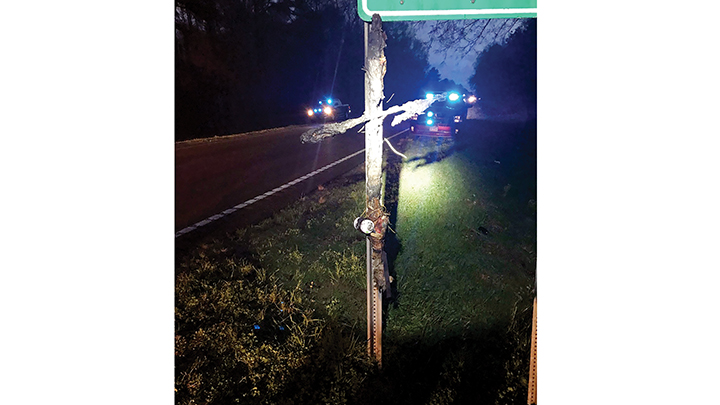 Photo submitted/A burning cross was discovered by motorists Saturday at the entrance to Lawrence County on Hwy. 27.

Investigators are searching for the person or group of people who left a makeshift cross burning on a state road sign at the entrance to Lawrence County.
Motorists driving on Hwy. 27 from Copiah County discovered the burning cross Saturday evening, said Lawrence County Sheriff Lessie Butler.
“I thought we were past those days, but I guess we’re not,” he said.
Butler said deputies got a call around 6 or 7 p.m.
“They got a call that something was on fire at the county line. When the deputies responded up there, they found that tied to the sign and it was smoking when they got there.”
He said the cross is about two feet tall and was made out of materials that would burn. It was attached to the left post underneath the green highway sign, but didn’t touch the ground. A can, which he suspects contained freon, was attached to it.
“They tied stuff to it that would burn,” he said.
He thinks the flammable material in the container was meant to cause an explosion.
This is the second time Butler has investigated a burning cross in his county. Two years ago to the day this one was discovered, deputies responded to a similar call in Sontag.
“We called the FBI and because nobody got hurt and it wasn’t in a predominantly black community during that time, they said there wasn’t a lot they could do with it but file it. I guess we’ll do the same thing with this one,” he said.
This latest burning cross was discovered about a mile from Oma.
“It’s not an awful long way from a black community,” he said. “I don’t know if that had a bearing on the thing.”
What’s also confusing is that a day or two after the cross was removed, graffiti was painted on the sign — the word Jesus is painted in white. At least that’s what Butler think it says. He doesn’t know if the cross and the graffiti are connected.
Police have no suspects at this time. The charge for the crime would likely be defamation of a state road sign. He thinks the suspect could also be charged with intimidation, but he’s not sure.
“I don’t know if it’s intimidation, ‘cause, who are you intimidating?” he said. “It wasn’t in a person’s yard. It wasn’t right at somebody’s house. It could just be some young kid trying to play a game.”
Anyone with information is asked to call the Lawrence County Sheriff’s Office at 601-587-2961.

National Hospital Week set for May 8-14

Remainder of Backwoods Bayou tumbles down