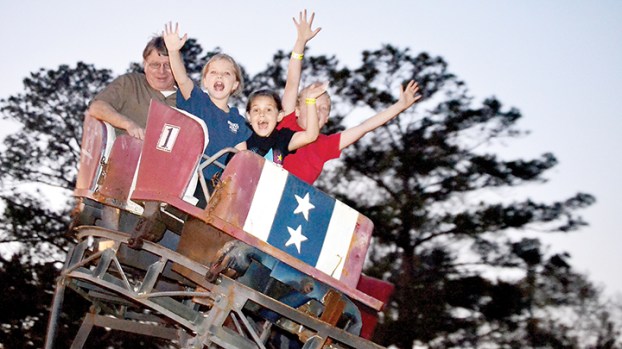 Daily Leader file photo/ A family sails over a hump on the rollercoaster at the Exchange Club’s Spring Fling last year.

Visitors to the annual Spring Fling spring fair Thursday will see a shiny new Scrambler on the midway at the Exchange Club Park.

Larry McFadden, a member of the Brookhaven Exchange Club who oversees the ride, painted the cars and replaced seats and lights on it.

“It looks like a big spider out there,” said member Steve Smith. “There are four cars on each leg and they go in circles as the whole thing goes in circles.”

Gates open Thursday, Friday and Saturday at 6 p.m. The rides will run from 6:30 to 10 p.m. Parking and admission are free. Armbands for unlimited rides are $10 each night.

The Exchange Club has hosted the Spring Fling about three or four years, Smith said.

“It kind of kicks off spring,” he said. “There’s no reason to have it other than it’s spring break and kids have been cooped up all winter.”

Members of the Exchange Club run the rides, while service organizations, churches and schools are in charge of the food booths, games and activities.

“It gives them the opportunity to raise some money to offset their expenses,” he said.

The money raised by the Exchange Club goes back into scholarships for some of those same groups as well as others throughout Lincoln County.

The spring fair also kicks off the carnival season in Brookhaven. After this the midway will open for BARL’s Barkfest April 7, the summer fair in May, Relay for Life’s fundraising event and the Mississippi Loggers Association’s Log a Load for Kids. Smith said the fair also opens for private events throughout the summer and fall.

Smith said McFadden “made sure everything was safe on it” when he had the Scrambler cars off to repaint. The club’s next project will be to repaint the rollercoaster, though he doesn’t think that job will be completed before the summer fair. The kiddie car ride was repainted last year through sponsorships and they’re thinking about doing the same thing with the rollercoaster.

A traffic stop in Monticello over the weekend turned into a pot pursuit that left marijuana scattered for miles along... read more