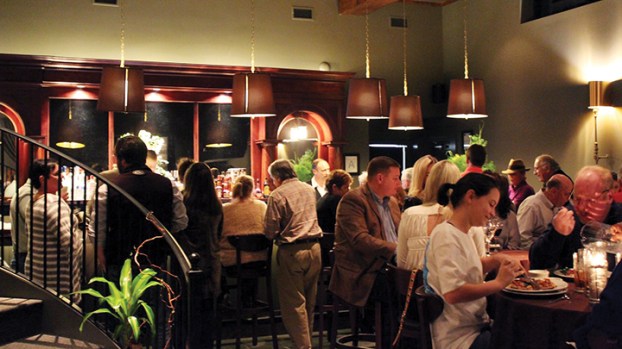 Photo submitted/Patrons enjoy a night out in the newly-built Mallard at Lake Dixie Springs. Owner Edward Malta, great-grandson to the Dixie Springs Cafe’s founder recently had a soft opening for the lodge, which includes cabins, a restaurant, a lounge and an events venue.

A catastrophic fire consumed Dixie Springs Café in 2015, but not the history that made it a landmark on Hwy. 51 just past the Lincoln County line.

Neither did the flames destroy the dreams of Edward Malta, the great-grandson of the original founder, Jim Carruth, who longed to follow in some pretty big footsteps.

Carruth established Dixie Springs Café as a lakeside eatery in 1939 and eventually passed the spatula over to his sons, Bubba and Les Carruth.

“It’s been a family tradition for locals and visitors alike, who flock to the scenic spot to enjoy the food, drink and atmosphere,” Malta said.

Over the years, the restaurant passed through a handful of proprietorships including Bubba Carruth’s daughter, food-columnist Ann Carruth-Jackson; family friend and lumberman Keith Byrd; and popular lakeside locals Joe and Kristine Kimmel.

Malta said he developed his taste for hospitality early-on working with City Grocery in Oxford and bartending on Sixth Street, the entertainment district in Austin, Texas. He spent his nights behind the bar and his days building a career in technology field.

Malta grew up on the lake, but also has family in Brookhaven. His grandfather was Roy Malta. His mother, Lu Becker, is the executive director of the Brookhaven Animal Rescue League.

He began making his way home in 2012 with plans to open a restaurant and venue of his own.

“All my life I knew I wanted it. I always knew I was coming back,” he said.

He built a small cabin on Lake Dixie Springs, and split his time from Texas and Louisiana. Malta took over operation of his family’s Cracker Barrel BBQ establishments in Lincoln County.

Malta considered building a restaurant in Summit, and even purchased and renovated a home there. He tried to purchase the Dixie Springs Cafe’ but when that didn’t pan out he bought the Bogue Chitto church with plans to move it somewhere near the lake and open up his own place.

Then came the fire.

Malta purchased the site and moved the 139-year-old church to his old stomping grounds. Building his dream took over a year.

The church features cathedral windows, a gothic bead board interior, 26-foot ceilings and chandeliers, and can be reserved for private events and weddings.

Gabled and glass new construction encloses the lounge and dining room. There’s a separate loft space above the dining room that is also available for private rental.

The center courtyard features additional seating, a bandstand, a large fountain and a bar area. Two guest cabins built onto the restaurant and bordering the courtyard are available for overnight stays.

Malta’s carefully crafted menu changes every few days and it is printed about an hour before the first guests arrive.

The dishes come from some of Malta’s favorite places and include a few contemporary retouches to some old favorites from the Dixie Springs Café. The menu includes aged ribeyes and filets, chicken and fresh fish.

Malta said he’s overwhelmed by the positive response and the drove of repeat customers in six weeks of operation.

“It’s been an extremely difficult two years, that’s why the warm reception we’ve had, I’m so grateful for it,” he said.

Mallard at Lake Dixie Springs is open Wednesday through Saturday from 5 p.m. to midnight, with dinner served until 10 p.m. Walk-ins are welcome, but Malta encourages reservations, especially on weekends.

The owner has several plans including a gospel brunch on Sundays and wine-tasting events on Wednesdays.

Malta wants to give back to the community and besides BARL, he’ll be supporting several worthwhile organizations and projects. First Bank will be hosting a private function there soon, Blues and BBQ as a fundraiser to benefit Camp Sunshine.

Donut glaze could be mistaken for fairy dust, and a breakfast of donuts and juice can be magical. Add to... read more