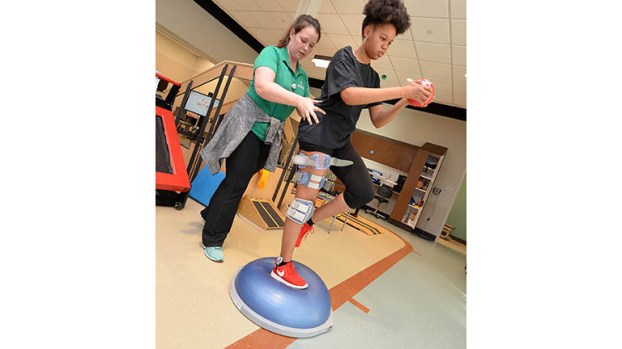 Something he wants me to do — Brookhaven woman recovering from stroke with faith, determination

She’s not worried about dying, even though she nearly did.

After a rare stroke put Brookhaven’s Mar’Shanna Graham into a six-day battle with the sharp edge of death’s blade, after it left her with a body that didn’t want to do what it was told and had to be retaught and retrained, after it put her schooling and career path on hold and dropped a set of challenges into her lap most 20-year-olds would never even have a nightmare about, she decided she had no concern for death.

Graham believes that’s why she lived, to accomplish some God-assigned goal that could come tomorrow, or next week, or 25 years from now. She believes the Almighty’s intervention was the only thing that saved her last year, when on Feb. 10, blood from ruptured vessels flowed out onto her brain and almost killed her.

She was taking a six-weeks exam in Human A&P at Mississippi College. She reached question No. 16, but never answered it. She doesn’t remember what it asked.

“I could feel the side of my face become heavy, and there was a beeping noise in my ear. I could hear it,” Graham said. “I raised my hand to my teacher, and by the time he got back there to me I lost all the feeling in my right side. I just kept telling him, ‘I can’t breathe.’”

“Things weren’t making sense to me. I couldn’t understand anything that was going on,” she said. “I wasn’t scared. It was more the people around me who were scared. You really don’t have any time, when you’re having a stroke, to be scared. Being rushed into the ER was the last thing I remember.”

Medics carried Graham to St. Dominick’s in Jackson, where doctors quickly diagnosed her hemorrhagic stroke and prepared for brain surgery. It was caused by arteriovenous malformation, a tangle of abnormally connected blood vessels that weaken over time, affecting less than 1 percent of the population.

She had a 50 percent chance of surviving the operation. She lived, and woke up in the intensive care unit six days later.

“I prayed and I cried, and I prayed and cried some more,” said Golenia Graham, Graham’s mother. “All I said to God, I asked him, ‘Please, bring me back my child. It don’t matter to me how You bring her back. I will deal with the rest.’ And He did that.”

Graham spent the last 12 months working with neurologically trained therapists at Methodist Rehabilitation Center’s various programs in Jackson, undergoing the full battery of therapies with the help of some advanced machines — learning to balance, walk, talk, remember. With her right side still undergoing rehab, she’s learned to write left-handed.

Walking was a challenge at first, but Graham takes on challenges. Before she graduated from Ole Brook in 2015, she was a JROTC cadet captain, a member of the National Honor Society, on the student council. She used a cane once, then tossed it aside.

“I’m getting it back, slowly. I’m amazed at myself,” Graham said. “I’m not as fast I used to be, or as physically fit. But I amaze them with what I can do. I never set myself any kind of limitations. I don’t know what I can do until I try it. I’m learning how to jog right now. The first time I tried it, I was completely horrible. But I’ve come a long way.”

Graham said she sometimes feels down about the things she can’t do anymore. The stroke rolled back some of her freedoms — she can still drive short distances, but depends on her mother for long trips. She works hard in therapy, but can’t get out and exercise like she once did.

But the stroke has given her clarity in life, and on the life ahead. She’s attending MC with the goal of being a nurse practitioner, and now she wants to specialize in the treatment of neurological patients. She’s well on her way — she made the Dean’s List last semester.

Most importantly, the stroke has given her clarity of faith. She’s a mentor in the college’s Blue and Gold 101 program, a Christ-centered program which pairs freshmen with upperclassmen who help them adjust to college life. She’s also a member of Swannanoa Social Tribe, a Christian sisterhood. She’s a member of Brookhaven’s New Jerusalem Missionary Baptist Church.

She also makes devotional videos to reach out to others her age.

“I’m beginning to have a voice. I speak to people more,” Graham said. “I believe God has given me a voice to be a power for somebody else. I’m just trying to be that voice for young people, to show them your life is not what you control, what you think it’s going to be. It’s what he wants it to be.”

Officials in Copiah County are hopeful dental records can help identify skeletal remains found in the burnt rubble of a... read more