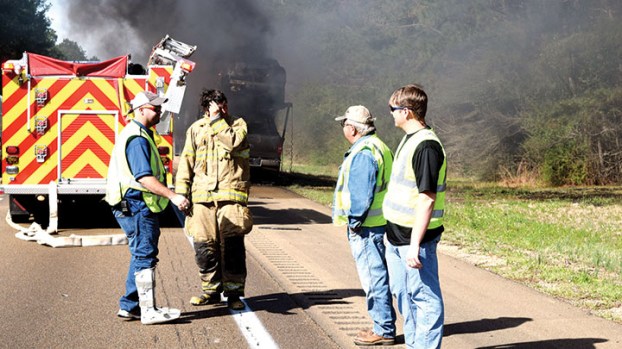 Photo by Donna Campbell Volunteers from the New Sight VFD discuss a plan of action for a car transport fire on I-55 north of Brookhaven recently. Pictured are, from left: Chief Cory Smith, Jimmy Walters Jr., Johnny Smith and Austin Smith.

New Sight firefighter wants to be a hero, like his dad

Austin Smith fought his first fires while still in diapers.

Of course, the New Sight volunteer firefighter did his fighting from a carseat, watching his dad slap on his turnout gear before tackling a blaze. Years later, still in the car, he watched with a mix of admiration and pride as Don Smith put out fires for their neighbors. When he turned 17, he became a junior firefighter, running calls officially with his father. When the state recognized him as an adult a year later, he became certified.

Smith, 20, is a volunteer firefighter with the New Sight VFD. He’s also a sophomore at Copiah-Lincoln Community College and a bagger and stocker at Piggly Wiggly. The Loyd Star graduate has an interest in politics and wants to be a family law attorney so that he can help people.

Helping people seems to be a common thread in Smith’s personality.

That’s why he’s a firefighter in his hometown. He wants to help his neighbors.

“I know this sounds corny, but I love New Sight,” he said. “I was born and raised out here. I went to church out here my whole life. I know everybody down this road, and it’s a good way to give back to them.”

When Smith isn’t fighting fires, hitting the books or bagging groceries, he’s tinkering on engines and polishing chrome. His passion for classic vehicles dates back to before he could drive. Smith organized the New Sight VFD car show for about four years until the fire department decided to hand the fundraiser over to New Sight Baptist Church, where it was held yearly.

Rebuilding old cars is a hobby. He recently restored a ’54 Chevrolet pickup, but it’s going to be hard to let go of it someday.

“Me and Daddy worked on it and my Paw Paw bought it for me. It’s got sentimental value,” he said. “I’m going to hold on to it for a little while and then, when somebody comes around with enough money, I’ll sell it and buy something else.”

The problem is, there may not ever be enough money to convince him to part with it.

Smith said his father is his hero. His dad had a heart attack five years ago at age 50. He should have only 20 percent use of his heart, but it’s ticking away at 100 percent.

“He’s someone good to look up to. He’s loving and caring and I strive to be like him everyday,” he said.

New Sight Chief Cory Smith said he already is. The young man is dependable and friendly.

“He’s dedicated,” the chief said. “He’s one I can rely on at 1 in the morning. He helps with anything we ask of him.”

Brookhaven Little Theatre gets $82K from arts commission, plans to expand the Haven

The Haven theater in downtown Brookhaven will expand by a few hundred square feet with the help of a big... read more