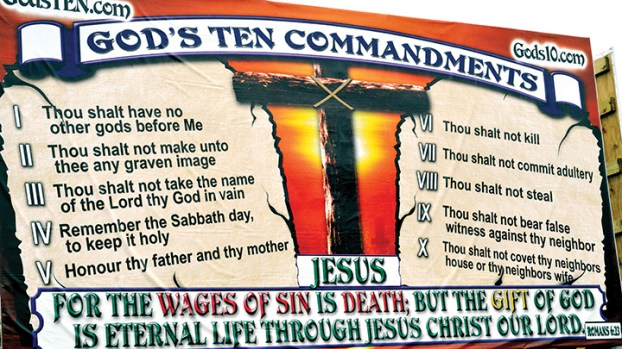 Photo by Adam Northam One side of Wayne Wallace’s sign displays the Ten Commandments.

The Ten Commandments billboard in Brookhaven will come down — and then go right back up, this time in compliance with the law.

Brookhaven businessman Wayne Wallace said he would remove and make modifications to his religious signs at the corner of Hwy. 51 and Industrial Park Road to bring them into compliance with the city’s sign ordinance. The city condemned the signs Friday after Wallace raised them without receiving a building permit and violated several requirements of the ordinance.

“We came to an agreement, and we’ll move it back to their specifications,” Wallace said. “Bottom line is we’re going to keep the sign, and that’s my ultimate goal — to make sure the sign stays there.”

Wallace said he would remove the existing signs to reinstall them on metal supports a further 10 feet back on his property in order to comply with the ordinance. He reached the agreement Monday in a series of meetings beneath the signs with Brookhaven Mayor Joe Cox, building inspector David Fearn and Ward 5 Alderman Fletcher Grice.

By agreeing to adjust the billboards, Wallace helped avoid what was shaping up to be a tense confrontation between city aldermen and religious supporters of Wallace and his signs at Tuesday night’s board meeting. Wallace had earlier promised to defy the sign ordinance and make a stand at the meeting, but had a change of heart when the situation came to a boil.

“We came to a gentleman’s agreement. It was the man’s thing to do. It was fixing to get out of hand, and I didn’t want that,” he said. “People thought the city was against the word of God, and that’s not what it was — it was strictly about the sign. You’ve got a lot of hotheads, a lot of rednecks here in Lincoln County, and they’re going to do it the way they want to do it. I tried to ward off the storm that was coming, and I think I have.”

Wallace’s billboards are from a website called gods10.com that aims to install such signs across America. Wallace said he’s working with a group that intends to install a Ten Commandments billboard in every county in Mississippi — they’re now looking for a place to install a similar sign in southern Copiah County, near the Wesson Truck Stop on I-55.

Wallace’s appearance at the board meeting was canceled after he and Cox reached an agreement.

“We were able to resolve that just sitting down and working that out. We’re proud to get that behind us,” Cox said.

An Alabama-based equipment company wants Lincoln County supervisors to get into the garbage collection business for themselves, but the board... read more