Funeral services for Nancy Winston Denham, of Brookhaven, will be a private cremation ceremony for immediate family only, in keeping with Denham’s wishes. A public celebration will be Wednesday, March 21, 2018, at 6 p.m. at Bethel A.M.E. Church. The event will be hosted by the Alpha Kappa Alpha Sorority, Inc. Williams Mortuary in Brookhaven is in charge of arrangements.

Denham, 81, died Sunday, March 18, 2018. She was born Feb. 8, 1937, in Chicago, Illinois. She was a beloved mother, grandmother and great-grandmother. She moved at an early age to Brookhaven, where she was raised by her grandmother, the late Emma Jane Winston. Nancy wanted people to remember her as a vibrant school teacher and as a friend is concerned with the welfare of others.

She was educated in the Brookhaven Public School System during her elementary through high school years, and graduated from Alexander High School in the class of 1955. She attended Alcorn State University, graduating in 1959 with bachelor of science degree in elementary education. She was a devoted Alcornite and active in the university’s alumni chapter, attending many Alcorn Alumni Regional Conferences. Further academic study was completed at Loyola University, Mississippi State University, Tuskegee Institute and Mississippi College where she earned a master’s of science degree in education.

She was an active member of her beloved sorority, Alpha Kappa Alpha Inc. and was a charter member of the Phi Mu Omega Chapter where she served as financial secretary, hostess and doorkeeper. In 2006 she was recognized for being the chapter’s first 50-year member at the South Eastern Regional Conference in Memphis, Tennessee. For 35 years, she was an outstanding educator in the public schools of Mississippi. She taught in the Natchez, Port Gibson and Vicksburg school districts and retired from the Hazlehurst Public School District after 30 years of dedicated service. After retirement, she continued teaching at Job Corps and Copiah Lincoln Community College. Always looking to serve others, she volunteered to teach inmates at the local jail. She was married to the late “Coach” Mason Denham of Forest, Mississippi. From that union two children were born, Traci and Tony.

Her memory will be lived through the lives of those people she touched as students, coworkers, parents, college personnel, church families, civic and community leaders and her precious family members. She was a member of Bethel AME Church in Brookhaven, Mississippi. Her devotion to her church and its mission will be sadly missed by all those who knew and worshiped with her.

Preceding her in death was her grandmother, Emma Jane Winston.

Nancy wanted people to remember her as a vibrant school teacher and as a friend is concerned with the welfare of others.

In lieu of flowers the family is questing that donations be made to the local chapter of AKA in Nancy’ s honor. 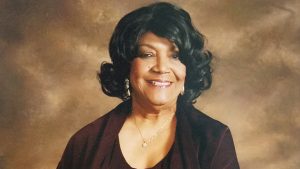