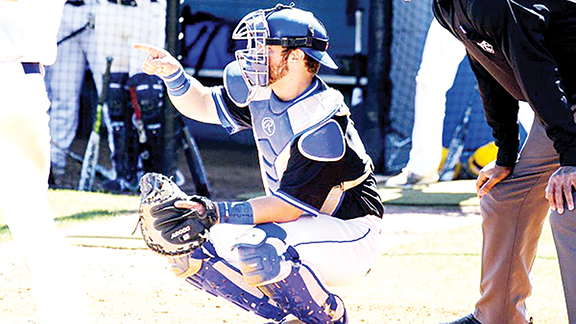 The Co-Lin Wolves dropped a pair of MACJC games to No. 18 Mississippi Gulf Coast on Wednesday, 13-5 and 6-5.

The tough losses move the Wolves, who received votes in the NJCAA national poll last week, to 11-6 on the season and to 0-4 in division play. Co-Lin is back in Wesson on Saturday as the Wolves take on the East Mississippi Community College Lions. Games are set for 2 and 5 p.m.

The Wolves got the first run in the high-scoring game one with a sacrifice fly in the top of the first from Ryan Zimmerman that scored Craig Bradley who led off the game with a single.

The Bulldogs bit back in the bottom of the frame with an RBI double, a run scored on an error, and another plated on a groundout. The productive inning left Gulf Coast with a 3-1 lead going into the second.

Mark Hubbard reached base with a single in the second, and later found his way home after a Gulf Coast error on a ground ball from Chandler Dillard to third. The run was the Wolves only score in the second and cut the Bulldogs’ lead to 3-2.

A wild pitch gave a run back to Gulf Coast in the bottom of the second as Gulf Coast pulled lead back to two, 4-2.

Jaylyn Williams led off the third and teed off on the third pitch of his at-bat. The solo homer to left field once again brought the Wolves within one, 4-3.

An error in the bottom of the third, a sac fly, and a two-RBI single in the fourth gave the Bulldogs a five-run, 8-3, advantage.

Co-Lin bounced back in the top of the fifth after an error on an Austin Tidwell bunt scored C.J. Estave, who got the inning going with a leadoff single. Hubbard followed with a groundout that plated O’Flynn to cut Gulf Coast’s lead to 8-5.

A base-clearing triple from Dylan Menhennett and a sac fly in the fifth broke the game open for the Bulldogs and stretched their lead to 12-5. In the bottom of the seventh, an RBI single from Isaac Williams secured the run-rule victory of the Bulldogs.

Josh Lewis earned the win for Gulf Coast after he went five innings, allowing five runs on 11 hits, striking out five and walking one. Bailey Hargrave threw two innings in relief out of the bullpen.

Kyle Whittington took the loss on the mound for the Wolves. He went three innings, allowing seven runs on three hits and striking out three.

Co-Lin was solid in the batter’s box as the team totaled 13 hits in the game. Estave, Dillard, Williams, Hubbard, and Bradley each had multiple hits for the Wolves, while Estave led the way with three hits in four at-bats.

The Wolves took an early lead in the nightcap as an RBI single from Ryan Zimmerman, Jaylyn Williams, and Austin Tidwell and an RBI double from C.J. Estave in the top of the first gave Co-Lin a 4-0 lead.

Zimmerman led off the third with another single and scored three batters later on a wild pitch to stretch the Wolves’ lead to 5-0.

Gulf Coast knotted the game at five-all in the bottom of the seventh with an RBI double, and a two-run homer from Brandon Parker. The late runs sent the contest to an extra frame.

In the eighth, the Wolves were unable to get on base, and the Bulldogs walked it off in the bottom half with an RBI single from Alden Davis.

Kole Kittrell got the win for the Bulldogs. He lasted five innings, allowing one hit and zero runs while striking out seven.

Justin Hutton took the loss for Co-Lin. He went one inning, allowing one run on two hits and striking out two.

Conner Ingram started the game on the hill for the Wolves. He surrendered two runs on five hits over five innings, striking out three.

Zimmerman went 2-for-4 at the plate to lead the Wolves in hits.