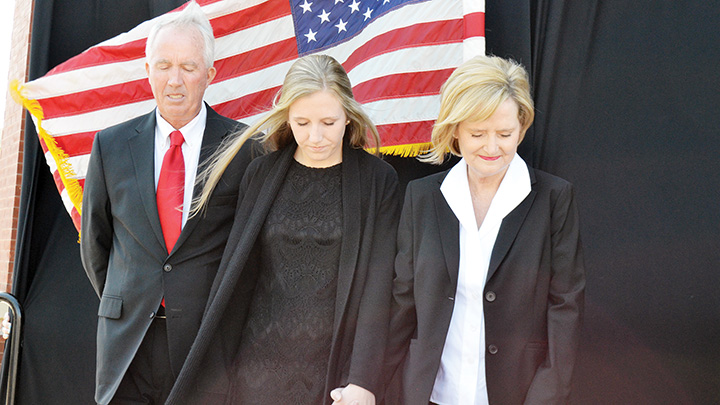 Of the more than 200 people who gathered in downtown Brookhaven at noon Wednesday to see Cindy Hyde-Smith’s historic ascension to the U.S. Senate, no one came farther than Stephen Berry, who traveled all the way from Germany.

Berry did come from the old Holy Roman Empire — it was 30 years ago that he immigrated to America and settled in tiny New Hebron in the northeast corner of Lawrence County. He’s followed her career from the state Legislature to agriculture commissioner and now to Washington, D.C., and when it was announced Gov. Phil Bryant would appoint Hyde-Smith to become the state’s first female senator, Berry respected the progressiveness of the decision and wanted to see it himself.

“I’ve come to see Mrs. Cindy’s speech, to see the first female senator in Mississippi,” Berry said. “I couldn’t wait to see a first-time woman get into the Senate. Gov. Bryant has made a good choice.”

On that windy day under the straight-down light of the noon sun, Berry stood out, his black fedora, peppered goatee and punchy, imported accent at odds with Ole Brook’s well-dressed downtown professionals. At his side was Brookhaven’s Vickie Douchard, a short and smiling mother who said she came to appreciate Hyde-Smith when their kids met through 4-H.

“I think Cindy will do an excellent job and I wanted to show my support,” she said. “She’s a feet-on-the-ground, common sense, good person. Very wise.”

Hyde-Smith will take over as Mississippi’s junior senator on April 2, following the retirement of 80-year-old Thad Cochran, who has represented the state in Congress since 1972. She will serve until a special election to fill the remainder of Cochran’s term is held this November, and if successful, will run for a full six-year term in 2020.

She was first elected as a state senator representing District 39 — which presently covers all of Lawrence and Lincoln counties, and parts of Copiah and Walthall counties — in 2000, holding the seat through three terms as a Democrat before joining a mass exodus of conservatives to the Republican Party in 2010.

Hyde-Smith and her family are cattle farmers, and she’s long been active in agricultural causes. Her last gig in the state Senate was chairman of the Senate Agriculture Committee. She became the Mississippi Commissioner of Agriculture and Commerce in 2012 and won reelection in 2015.

Lincoln County’s Robert Earl McGehee, a cattle farmer and president of the local Farm Bureau, said the agriculture community is behind Hyde-Smith “100 percent.”

“She has served us well as senator and agriculture commissioner, not just as a politician, but as a friend,” he said.

The night before she announced her first campaign for agriculture commissioner, Hyde-Smith and a few supporters retired for dinner one evening at The Inez in downtown Brookhaven.

Stone County Farm Bureau President J.B. Brown, from Perkinston, was with her then, and he was in Brookhaven for her big moment Wednesday, smiling under the shade of his cowboy hat.

Brown said Hyde-Smith’s experience as agriculture commissioner will serve her well in the high-stakes politics of Washington, D.C.,

“As far as agriculture, Mississippi is a very diverse state. Rice-growers, beef farmers, catfish farms — she’s been tested on how to represent a diverse group, and she’s handled it well,” he said.

Brown believes Hyde-Smith can defeat her November challengers, which so far consist of Republican state Sen. Chris McDaniel and Democrat Mike Espy, who served as agriculture secretary in the Clinton Administration.

Thursday afternoon, longtime Republican strategist Andy Taggart said he also was “seriously considering” jumping into the race. Hyde-Smith is also facing the specter of running a campaign aligned with President Donald Trump without Trump on her side — the president apparently intends to withhold his support from any of Mississippi’s Senate candidates until he sees how the race shakes out.

No matter what, Brown is a Hyde-Smith man all the way.

“I never watched two roosters fight where I didn’t want one to win,” he said. “And with Cindy I’ve got a banty hen.”

Hyde-Smith also has the support of her preacher, Macedonia Baptist Church Pastor Garland Boyd. The pastor delivered the invocation for her Wednesday rally, saying it was an honor and privilege to do so.

“I am on Team Cindy and I think she’ll win, she’ll do great,” Boyd said. “She is a genuine Christian person with a deep and abiding faith in God. She’s passionate about the things she believes in, and she’s a very genuine person. What you see is what you get, and she always take the high road. I think God blesses that.”

Boyd said Hyde-Smith has been active at Macedonia since before his arrival there 10 years ago. She’s served on numerous committees and is the current chair of the personnel committee, while her husband, Michael, is Sunday school director and a deacon.

Hyde-Smith’s daughter, Anna-Michael Smith, said the family has been in constant contact with the Almighty while her mother considered the Senate appointment.

“We’ve prayed more than you can imagine — down at the heart of our home, at church, we prayed a few times before we came here,” said the Mississippi State freshman.

Hyde-Smith’s husband Michael — whom she introduced Wednesday as “my favorite cowboy” — said it was difficult for her to walk away from the agriculture position.

“No doubt in our minds it’s the right decision,” he said. “She has tremendous support. It’s always been Cindy’s goal to be wherever God wants her to be.”