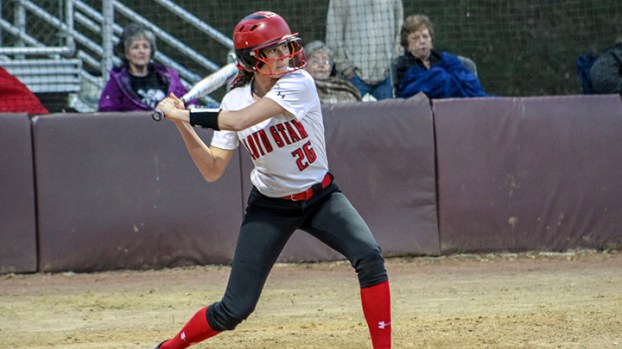 Photo by Emily Phillips/Loyd Star junior Meagan Poole readies for a swing in Thursday night’s loss against the Lady Yellow Jackets of Enterprise.

Enterprise’s Lady Yellow Jackets recovered from a rough start Thursday night to pull away and leave Loyd Star in a 9-0 shutout.

Loyd Star went for the psychological advantage by being relentlessly vocal from the dugout. The increasing volume of chants and cheers in order to throw off the pitcher was utilized up until the last batter of the night.

But it didn’t work — despite getting seven players on base, the Lady Hornets were unable to bring any of their runners home. The Lady Yellow Jackets, meanwhile, adapted to the pressure and shrugged off two opening innings of pop-ups and easy outs to start plating runs to win the game.

“We started out slow, but the second time around, we hit the ball better and played solid defense,” said Enterprise senior pitcher Carlee Nations. “Keeping our confidence and hitting the ball like tonight is the key.”

The third inning showed a surge in base hits and on-base percentage that quickly gave Enterprise a 5-0 lead. The Lady Yellow Jackets made it through their entire batting order, putting six runners on base. Senior Carly Polk hit a double, Carlee Nations used a sacrifice bunt in her favor and eighth-grader Abby Richardson walked. Senior Jana Nations, freshman Lauren Gartman and eighth-grader Natalie Harris each hit singles.

“Getting out early and jumping on the five runs early on in the game made me feel the confidence we needed to win and do well,” said Polk, Enterprise’s centerfielder.

The chants and cheers became background noise to the Lady Yellow Jackets, who continued to put points on the board while Loyd Star came up short.

“Loyd Star is a really good team and is coached extremely well,” said Enterprise coach Tyler King. “My favorite part about my team is how we are able to adjust to gameplay. If we don’t come out in the first inning strong, we definitely come out in the second with strong at-bats. With that resiliency, we hope to have a really good season.”

Loyd Star will play at Bogue Chitto today at 6 p.m.

Enterprise will host Bogue Chitto on Thursday at 6 p.m.